A “STORYBOARD” OF THE LUXURY CRUISE OF PAPUA NEW GUINEA 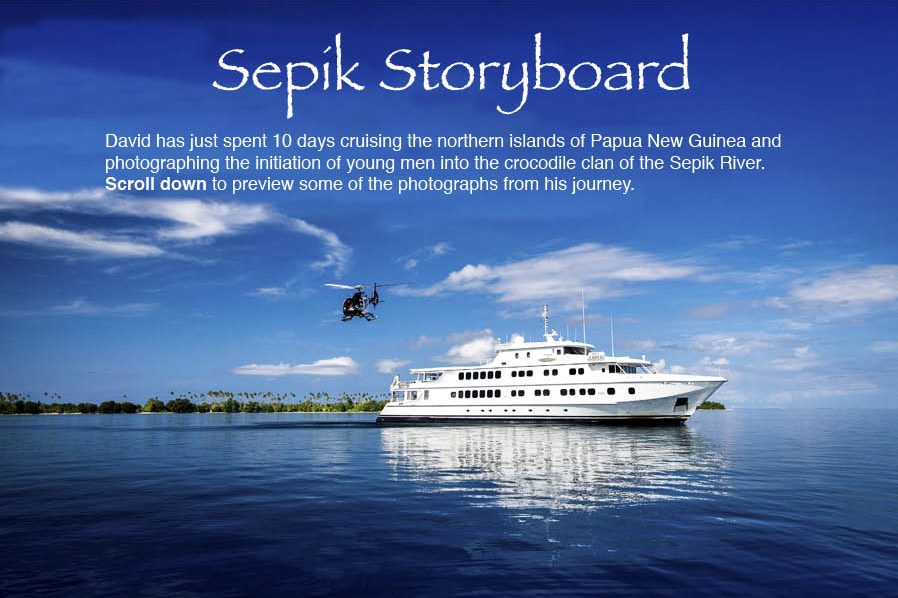 As I wrote earlier, I’m just back from a 10 day cruise and, before I left, I decided to challenge myself and put together a “Storyboard” – or a visual essay if you like – of the trip (below) . The vehicle combines tourism images, with a bit of post-production art and a good dose of marketing so viewers can get a feel for what the trip was about. It requires a lot more effort and a very different approach going in – ie detail is a lot more important and, obviously, its the combination of images, rather than a single image, which you need to stay focused on. It can see the format working for destinations, resorts and cruises. We’ll see next year.

JUST BACK FROM A LUXURY CRUISE OF PNG 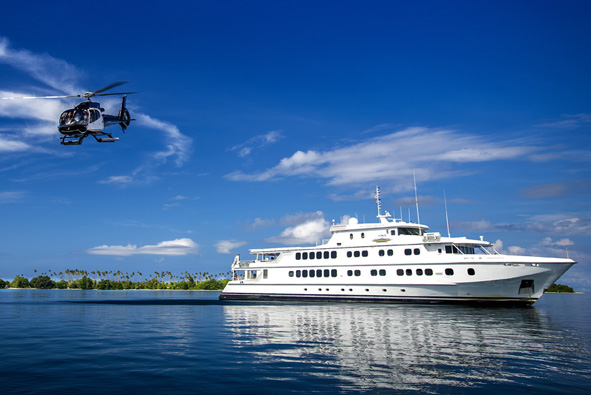 It was a top cruise (as you’d expect for AUD$30,000 a head, he says) with exquisite food, fine service, diving, snorkelling, fishing, helicopter rides through some of the most remote country on earth, and the company of some seriously well off people. Of course, some lovely photo opportunities unfolded as we wove in and out of the northern islands and up the Sepik River to photograph the crocodile scarification ceremony. 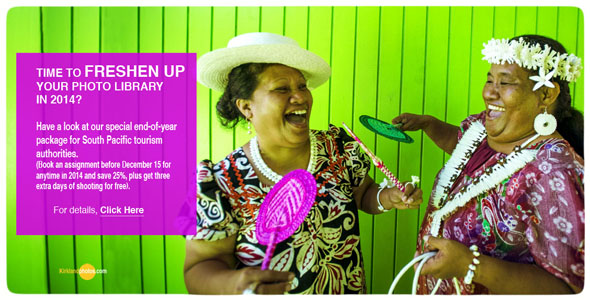 I’m just heading out the door on a cruise shoot of Papua New Guinea but, before I leave, I’ve launched my annual promotional cycle, inviting commissions in 2014 (promo cards below).

The packages, which I extend to tourism authorities, resorts and cruise operators, represent the best value for money I offer all year round as it allows me to schedule my assignments well in advance and it gives my clients the opportunity to save money and get in early with their booking to ensure my availability at a time that most suits them in terms of the weather, logistics and major events they may want photographed.

The promotion was launched only last week and already booking are being received. I’ll have a fair idea how 2014 is shaping up by December 15 which is the deadline for the End-of-Year offer. 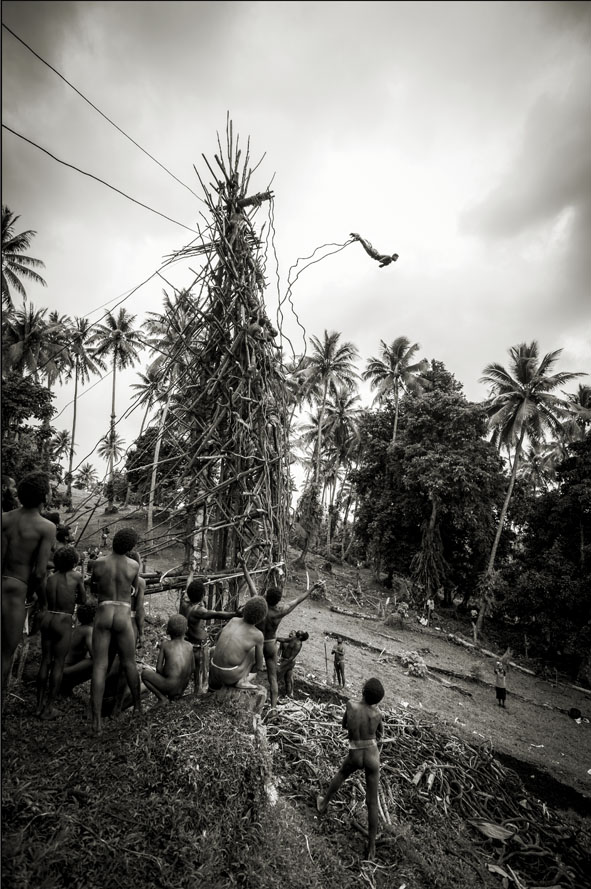 Capture Magazine – Australia’s premier publication for professional photography – has just judged a photograph of The land diving ritual I captured (below) to be one of the top two travel photographs shot in 2013.

The image came second place to a picture of a rooster (don’t ask, although I quite liked the image).

It’s the second time I’ve received recognition in the publication. In 2011, I won the best documentary photograph for a shot I did of two crocodile clansmen on the Sepik River, and I took out a top travel photograph award for a picture of a group of Huli wigmen preparing for a Sing Sing. This time, it was Vanuatu’s turn.

Ah well, a pat on the head goes a long way and, hopefully, the image will draw attention among Capture’s readership of the need – and the urgency – to record and showcase the disappearing traditional cultures that surrounds us, before it’s gone completely.

Next Stop: A 10 day cruise of the Papua New Guinea islands on the luxury vessel, True North (click here for details) 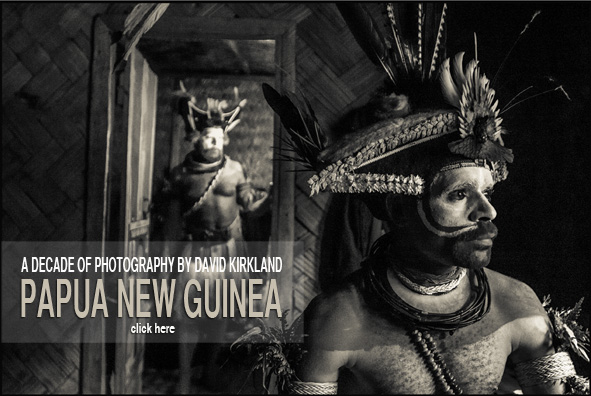 In 2o14, we will launch Papua New Guinea – A Decade of Photography by David Kirkland – a 100 photo expose` of the most collectable photographs I’ve captured of PNG over more than ten years. All of the photographs will be in black and white and sold as Limited Edition Prints on A4 archival stock. Only 100 signed, registered prints of each photograph will ever be sold.

Thousands of images are being considered now for inclusion to the series. An On-line preview of some of the photographs to feature can be viewed by clicking the photograph above. Here’s some of them (below)

JUST BACK FROM FIJI, SHOOTING FOR WESTPAC BANK 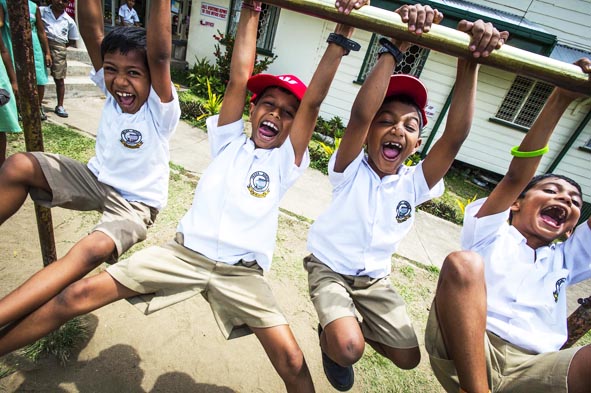 I enjoy the few corporate shoots I do (Westpac and Digicel are my only corporate clients) as its an entirely different pace from my tourism shoots and I like the idea of personalising and localising the subject matter (in this case, a financial institution in Fiji). I don’t always get the time needed to plan for ideal conditions but I like the challenge of producing appealing images in the short time I’m given. This is the second shoot for Westpac in Fiji so it was rewarding to see the images from the last shoot everywhere – on billboards, posters, teller machines and in every Westpac bank. Credit to the client and her designers who have done a great job in developing such an eye-catching brand built around the tag line “Banking for Generations.” A hard cover book on Westpac’s entire South Pacific network is now in production, drawing from the library of images we have produced over the past three years.