I’ve just returned from Sydney and shooting the Huli Wigmen who were performing at half-time at the Four Nations Football Series. After the game, I decided Sydney Harbour would be a great backdrop for some photography so I made arrangements to shoot them there the following day. As I positioned the two Hulis on a seat in front of the Opera House, a security guard walked over and hassled me while I shot and asked if the photos were for commercial purposes. I said I hadn’t decided and continued shooting, reasoning he was being officious (we weren’t bothering anyone; there was only the three of us and no equipment), that we’d be done in five minutes, and that I was not about to sacrifice a rare opportunity to photograph two unlikely national icons in the same vicinity. Protesting, but unsure of how to respond to being dismissed, the security guard eagerly conferred on his hand-held radio and insisted on hovering in the frame (picture below) while I continued to shoot. We got the heck out of Dodge before the cavalry arrived. 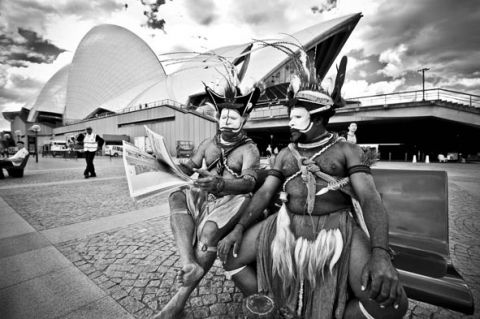 When we moved to The Rocks it was the same thing. As we walked along, with me taking pictures of the Huli wigmen looking like tourists, a burly security guard appeared and asked me if I had a permit. When I said no, he told me I wasn’t allowed to take pictures. Surely, this was a joke I thought, looking around at hoards of tourists doing virtually the same thing. Faced with the prospect of a confrontation and being banished again, I lent in and asked the owner of a cafe we were standing next to if he minded us taking pictures of the Hulis drinking a coffee on his premise, to which he heartily agreed. (In hindsight, I guess I could have taken refuge nearby in Ken Duncan’s gallery). By the time we’d finished, the security guard had gone (along with my enthusiasm to photograph The Rocks) so we jumped on the Manly Ferry and took a few pictures from the water with the Opera House in the background.

Having returned to Brisbane and considered the process I would have been expected to go through to gain all the necessary permits – the forms, the expense and the time involved – it is clear to me that authorities policing professional photographers in the Sydney Harbour precinct are being over zealous and that the various rules do little to accommodate a profession which does much to benefit the precinct and tourism. This was not about the money or disturbing the peace. According to the six page permit application the Sydney Harbour Foreshore Authority expected me to fill out, my impact was classified as “Ultra Low”; no charges would have been involved. What this is all about however, is unnecessarily restrictive rules on professional photographers which are curbing creative expression. Why should a professional photographer with no more impact than a regular tourist be so inconvenienced? Outdoor photography is, by nature, opportunistic so knowing exactly where you will take the photograph and getting permission in advance is not always practical (and its certainly not desirable). In situations like this where we were not harming or disturbing the environment, professional photographers – in fact any photographer – should  have the right to shoot without interference.

That local councils, government entities, private companies and state and federal authorities may each have their own restrictions and levy whatever charge they like on photography or any freedom of expression is draconian.

In the meantime, lets hope the Huli Wigmen feel a little more welcome the next time they come to Australia.

Note: For more information about restrictions on photographer’s rights in Australia and the good fight that’s being waged to end them, visit Ken Duncan’s web site Arts Freedom Australia. It’s well worth the visit.

« JUST BACK FROM BRUNEI
DAVID WINS BEST DOCUMENTARY PICTURE FOR 2010 »