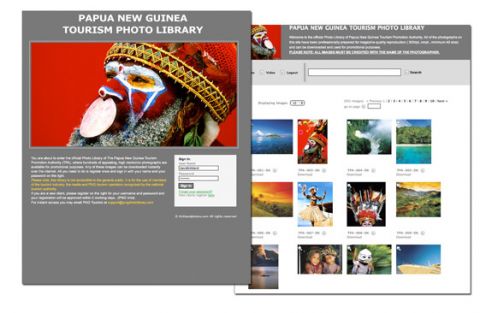 For the past three years, I’ve been running all over  Papua New Guinea shooting its tourism highlights for an on-line  photo library we’ve been building for the national tourism authority to promote the destination worldwide.

Last week, I formally handed over the library (above). From thousands of images captured, 500 of the best pictures have now been added to the library – all of which are licensed to the tourism authority to use for promotional purposes and can be accessed by the travel sector and travel media. We built the on-line library a year ago and we’ve been adding to it ever since (I did about four assignments a year). When we last checked the stats, 300 registered users had signed on and 25,000 images had been downloaded which is publicity the country may not have had if the library was not available and the images were not so readily accessible. Its been a great project to work on and a fantastic adventure – a photographer’s dream, traveling a country regarded as the last great frontier as a guest of the national tourism authority.

I’ll look to add a preview of what I consider to be some of the best images captured a bit later on. In the meantime, this is my month for scheduling in my assignments for 2011 so I must away.