I’M NOT AN ORIGINAL THINKER, JUST A TASTEFUL THIEF

Before I head off on assignment, I scour photo libraries on the internet to gather ideas for the shoots I’m going on.  I also keep a folder of good ideas I’ve collected from magazines. As I’m often heard to say, I’m not an original thinker, just a tasteful thief (that said, I like to think I add to the idea and improve on it where I can). This picture (below) resulted from a shoot I just did of Sinalei Reef Resort and Spa in Samoa. While we worked through a range of stock shots on the tennis court, it was good to have this idea to refer to.

Sinalei is Samoa’s premier boutique beach resort and probably one of the best examples in the South Pacific of a property that has successfully incorporated the country’s traditional culture into both its design and the experience it offers visitors.  I’ve been shooting it for several years now and I’d highly recommend it if you’re looking for a relaxing holiday (I can vouch for Beach Fale’s 2 in particular …….and a lime and coconut tart that’s to die for). Click on the photograph below to see some more images of the resort or visit their web site at  www.sinalei.com. 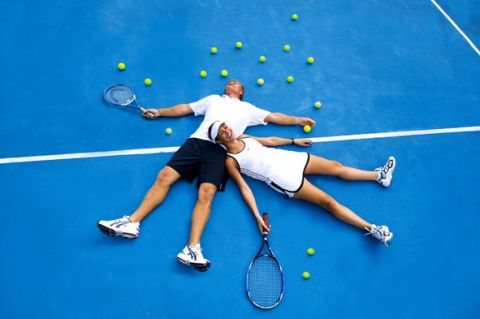 « CAUGHT IN THE SPOTLIGHT
CORPORATE SHOOT….with a bit of personality »