E-Books, I-books and Amazon – Looking to go digital and on-line with 15 titles. 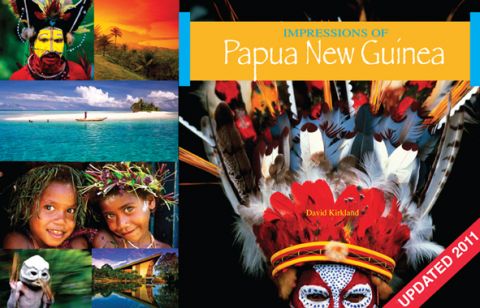 David’s latest e-book. Impressions of Papua New Guinea – due out shortly on Amazon and in I-book.

Probably one of my most successful books was the first coffee-table I ever wrote and published. It was called Impressions of Papua New Guinea – 40 short stories and 100 photographs of my adventures in PNG about a decade ago. It quickly sold into its third edition but when local retailers lifted the price to five times what I sold it to them for, sales slowed and there seemed better ways to tie up my money. Its all very well being a photographer, a writer and eventually a publisher but one of the most critical elements of making a book commercially viable is the distribution. So now, 10 years later, we’re well into the Internet age with I-books and Amazon representing new ways to get your book to market – actually a global market. All you have to do it produce your e-book, upload it and watch your on-line cash register ticking over. Well, that’s the theory anyway and, with millions of books now uploaded, there’s at least some comfort knowing that I’m not the only idiot who thinks there may be something in it. Hence, we’re looking to test the market for ourselves by getting my 50 Top Tips on Photography (refer following Blog entry) into Amazon and the Apple Store. The second book to go up will be a revised edition of  Impressions of Papua New Guinea which, hopefully, will be popular among the thousands of expatriates heading for PNG as a result of the resource boom. Fortunately, I’ve got two weeks between assignments so I have a bit of time to play with it all. As you can see, we’ve designed the cover to a standard template we’re using for our e-books (above) and we’re now re-configuring and updating the raw material to a format that will better suit the I-pad. Oh, and we’re working with Apple “aggregators” (you may well ask!) to get the books uploaded. It’s a steep learning curve and time consuming but, hopefully, within the next fortnight, there will be two new e-titles out there.