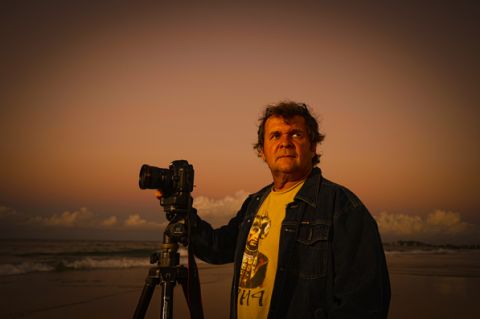 I’ve decided to diversify my style of photography and, while still concentrating on tourism, I plan to work a bit more with portraits and look at a more documentary approach to my subjects. Tim (above) is the general manager of my photo library and a professional photographer in his own right. He’s proudly Hungarian and he makes a good subject (but the most unco-operative model I’ve ever worked with) so we both took a day off yesterday and went to the Gold Coast to practice some new techniques. I wanted to play with artificial light and my new D4 , Tim wanted to use his panoramic camera and do some arty farty stuff with the waves so we used both as an excuse to do, well, a long breakfast and a long lunch before spending all of 30 minutes actually playing with our cameras. For my part, I’m quite liking the clean light of a flash when its use is barely discernible. There’s a fair bit of fiddling around with gear but it certainly has its place and I’m looking forward to playing with it a bit more.

In the meantime, I’m off to Papua New Guinea again on the weekend and, if I can juggle a few things around, Saudi Arabia after that which should give me  some great subjects to practice on.