From my last entry, you would have expected to see my “Hero Shot” of Saudi Arabia proudly adorning this page. After all, I had the most fantastic location (Madain Saleh) as a backdrop, we’d planned for everything the day before, the camels and a rider was organised, my camera gear which had gone missing a day earlier had been found and returned by the airline (reason for considerable angst I can assure you) and the weather was perfect (50 degrees but clear skies and stable). I’d been anticipating the photograph ever since I arrived in Saudi; all we had to do was drive three hours to the location so I could press the button.

Only – for reasons beyond my comprehension – we detoured into a remote valley on the way to snap off a picture on the shot list and, in the process, the engine of our four wheel drive blew up leaving us stranded.

It was probably fortunate we were in a remote valley as the language I employed to describe my predicament could have toppled buildings.

Five hours later – after the sun had gone down (along with my reason to live, he says) – I was riding along in a tow truck wondering what I had done to attract such a punishment. And there was no chance to return as I was leaving for Australia the following day.

Still, we managed to capture some appealing photographs during our 10 road trip – a preview of which you can view by clicking on the photograph below (It doesn’t take much to imagine similar pictures of Madain Saleh, only with camels being led across the foreground by a lone Saudi rider. Arggggggggggggg!!! 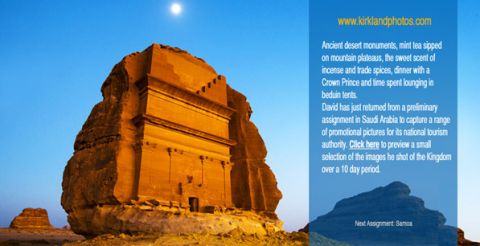