I just spent two days at Mada’en Saleh in Saudi Arabia which, as I wrote earlier, is an ancient site where tombs have been carved into towering rock faces. It’s a challenging location to photograph, with many of the tombs facing in different directions to the sun, extreme lighting for most of the day and a fair bit of ground to cover whether you’re on foot or in a car. But the results can be special if you get it right. I can highly recommend it to photographers but you’ll need at least two days to do it justice – the first to run around and work out what you want to shoot and when; the second – once you’ve studied how the light falls – to get it right. Me, I could have easily spent a week photographing it and capturing its many nuances.

As the two photographs below attest, the time that worked for me was before the sun actually rose, using a long exposure (F16 at 30 seconds) and a tripod. In the top picture, the tomb started glowing before the sun had risen above the horizon (something to do with the refracted light I’m told) and I shot for that particular blue in the sky to offset the colour. The bottom picture was shot in virtual darkness (same settings, again with the tripod), this time with the intention of capturing the stars and using the light from the full moon to illuminate the face of the rock.

It takes a bit of practice to get it right but the alternative – certainly on this occasion – would have been to shoot the tombs in a starker light and I was keen to produce different images to those I’d seen of Mada’en Saleh before. 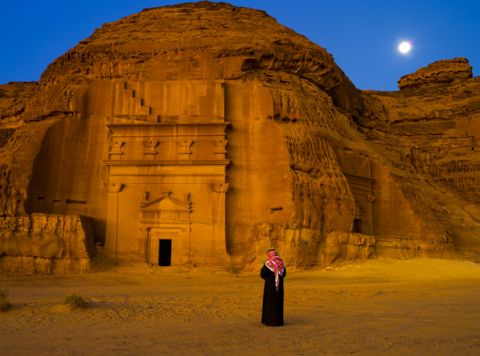 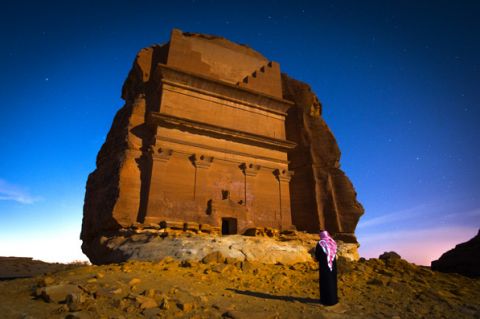