I’m sitting in Kiribati – one of the most remote and visually stunning locations in the world –  rimmed by a lagoon of turquoise water and white sand beaches that spread as far as the eye can see – only I can’t see a thing. Its pouring – grey, wet and windy – and I fear my mood has now synchronised itself to the weather; I’m in Photographer’s Purgatory

Today was the culmination of three days of planning. We were off to a picture-perfect atoll two hours away, a charming Kiribati sailboat had been conjured, local talent had been carefully selected and I was off to capture that singular, defining image of the destination.
Instead, I sit here seriously considering wandering off into the lagoon weighted down by 23 kilos of camera gear, never to be seen again.
I thought the Gods might have tired of the joke after yesterday when the 20 dancers in costume we’d organised clambered down off the truck and seated themselves in front of me in a traditional Mwaneaba (meeting house). I’d done the reconnaissance of the venue the day before and worked out that between six and six thirty, beams of light from the sunset would shine in beneath the lowered, thatched roof  and bathe the dancers in a spectacular glow. Arriving at about four, there was an hour of costume correction and a few things needing to be moved around but everything was in place – just in time for the deluge to begin, enveloping all of us in darkness.
It hasn’t stopped since.
Sometimes, I wish I just taken a job in the public service. 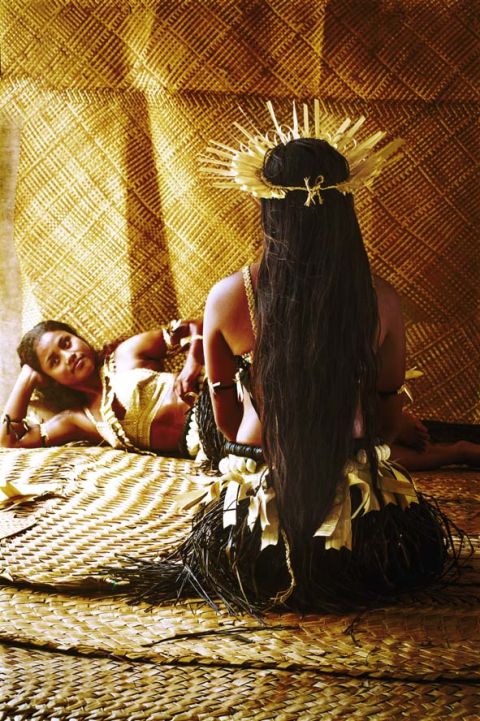 « KIRIBATI – FOR TRAVELLERS, NOT TOURISTS
PLAYING WITH BLACK AND WHITE »