Today, the weather conditions were absolutely perfect, only the starter motor on the AUD$1600 a night boat commissioned to take me to the outer islands blew up (forget shooting the Albatross; clearly, I am the one responsible for annihilating the entire species). This, after my two boat debacles in Kiribati; I am cursed.

In the meantime, I headed out with Charlotte and Chris to have a play with my new underwater camera gear on a nearby plane wreck (below). It may not be the Saratoga at Bikini Atoll, but I’m quite enjoying being beneath the waves. I’ll post some tips for shooting underwater in a later entry. My gear: The Sony RX100, with a Recsea underwater housing and an ultra-wide angle lens which I’m looking forward to using to produce a few half underwater/half above the water shots. 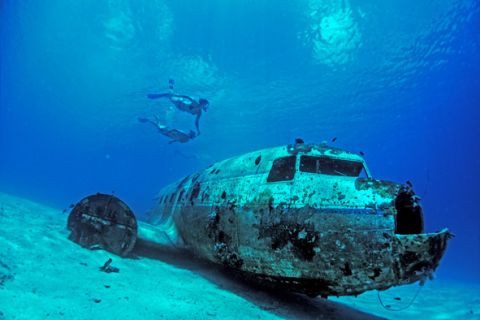 Snorkelling on a plane wreck near Majero, Marshall Islands