FINISHING UP IN POHNPEI AND HEADING FOR PALAU 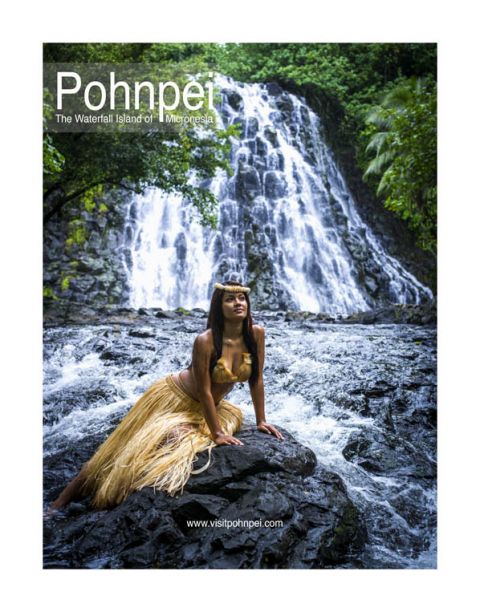 Pohnpei – “The Waterfall Island of Micronesia”

Just finishing up the shoot in Pohnpei, confident that one of the four Federated States of Micronesia now has a solid body of images to work with.

Again, its been a productive assignment. Despite the erratic weather, we managed to balance the overcast weather shots (waterfalls and people etc) with the sunny shots (scenery and landmarks etc) to produce a broad portfolio of promotional images. And we captured some nice “people-interracting-with-the-locals-pics” thanks to Ben and Sam.  The only shortfall: I wish I got the Manta Ray shot I was chasing (and nearly died for when I vomited into my regulator at 30ft, trying to get ahead of three large Mantas in strong currents) and I would have liked to add some paradise island pictures to the range which were nearby but I just didn’t get time to shoot.

While I’ll post a best-of selection when I get back to the studio, here’s one I’ve quickly mocked-up into a poster promoting Pohnpei as The Waterfall Island of Micronesia which is how I’d be marketing the island. Keprohi Waterfall (featured above) is just one of Pohnpei’s many stunning waterfalls which are attractive to visit all year round due of the island’s abundant rainfall. While Nan Madol – the “Venice of the South Pacific” – is certainly a unique drawcard to Pohnpei, personally, I think an island literally overflowing with waterfalls is likely to appeal to a greater number of people.

Next Stop: Palau with its sharks, its jellyfish lake and its characteristic rock islands (which, hopefully, I’ll be shooting from the air with the big camera).

PS. Thanks Kukulynn – without you, we never would have had such a productive shoot.