ANCIENT RUINS AND SAKAU – ELIXIR OF THE GODS 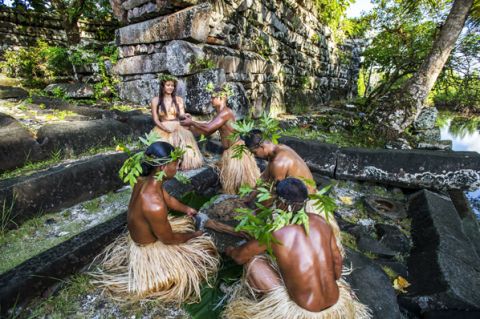 Finally, we get a short break from the rain (it is, I am told, one of the wettest islands on the planet) and we head out to the ancient ruins of Nan Madol (above) where a Sakau ceremony is performed. Nan Madol –  the ” Venice of the South Pacific” – is shrouded in mystery as the ancient civilisation that once inhabited it simply disappeared, leaving the partially submerged ruins.

Sakau , on the other hand, is less mysterious.  It is, to the people of Pohnpei, what Kava is to the South Pacific, only the euphoric drink is processed differently. The pepper plant is ground on a stone, Hibiscus and water are added and it is squeezed out through a plant fibre belt as a slime into a coconut shell before being sipped/drunk. The hibiscus, apparently, gives it the slimy texture. And, dear reader, it was upon this discovery that I made the serious mistake or carrying on about how I have drunk Kava all over the South Pacific, suggesting the strongest I have had was elsewhere.  So, on Sunday night, my hosts are determined to settle with me the argument about which island produces the strongest elixir. Having reeled from a courteous sip I had from a single shell during the photo shoot, this could well be the last entry you’ll read from me.

In the meantime, here’s one of the pics from the ceremony to show you what we’ll be drinking: 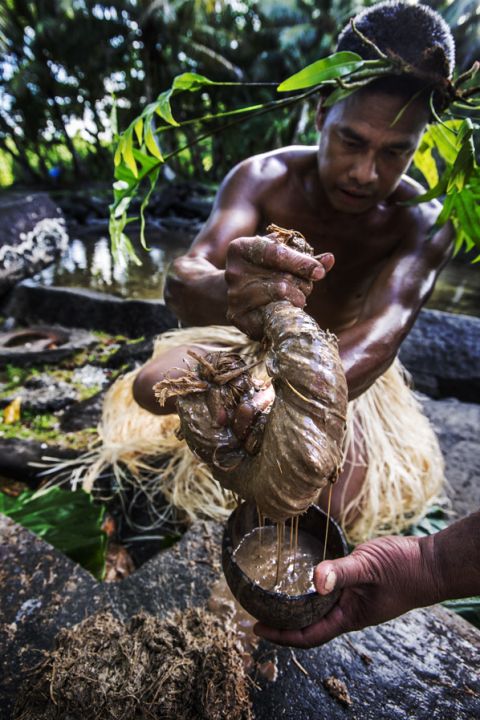