Its 4am and I’ve been stranded in Auckland Airport having arrived yesterday to find my connecting flight from Niue back to Brisbane left two days ago. I’m supposed to be in Fiji today. Not happy Janet.

It would be totally unremarkable for me to miss flights, arrive late, end up in other countries, get confused by 24 hour clocks, head off in the opposite direction to where I should be going or ignore different departure dates either side of  the International Dateline. It’s a mystery to me – and anyone who knows me – that I return from half the trips I go on.

Which is why I pay a $$##@@! travel agent to arrange my tickets. So, Kim of Student Travel in St Lucia, Brisbane, you’d better be ducking for cover when/if I ever get back.

In the meantime, here’s the preview of the Vanuatu shoot I did before I left  (below) – the first of three assignments the country’s national tourism authority has commissioned to build a promotional photo library of the destination.

Niue’s now in the can (I’ve just spent a week swimming with venomous snakes, cave diving and wandering jagged island tracks) and I leave on a seven day cruise of the Fiji islands tomorrow…….that’s assuming I can turnaround my washing in time and find a replacement for one of my cameras.  I’m told that if I catch the 11.30 flight tomorrow night , I’ll arrive at 4.30am in time to board the ship. Ah, the joys of working in the South Pacific. 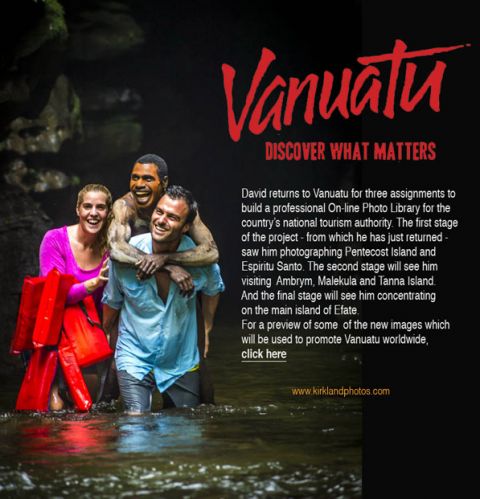