I’m on one of the most remote island countries on earth – Tuvalu – wondering what I must have done to the Gods to offend them thus as my camera equipment was off-loaded back in Fiji. The only chance I have to be re-united with it is on Tuesday – the same flight I’m due to leave on.

%%$$#@!! Tuvalu may well have garnered international attention because its sinking or the seas are rising but, surely, this happening to a professional photographer must rank right up there in the sympathy stakes.

It could have been worse I guess. I could have been less of a drama queen when the airline insisted my carry-on weight was too heavy because I was carrying one of my cameras in my backpack (me writhing on the floor in tears and screaming eventually saw them turning a blind eye). That said, spare a thought for the scores of glaucoma patients – one ferried over from one of the outer islands on a stretcher – who have been waiting in line to see the volunteer eye specialist team which arrived here with me on a once-a-year mission to bring sight to the needy. Their equipment was off-loaded as well. Surely, you’d think if there was offloading to be done because of weight limitations, we’d at least be given the opportunity to choose our essentials (which, in my case, would have seen me running around butt-naked but for a camera and two lenses in my hand).

It’s now day three of the shoot – two days to go – and, to add to my woes, its been pouring ever since I arrived. Here’s an indoor shot I captured in the interim (follows). Hopefully, we’ll get just one day of fine conditions while I’m here….please Gods, I’m begging you. 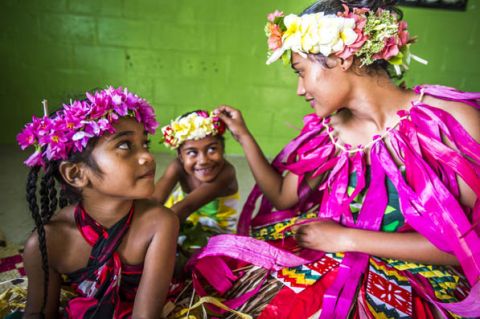 …being tested in Tuvalu

« BACK FROM FIJI CRUISE, OFF TO TUVALU
TUVALU PREVIEW – JUST SCRATCHED IN »