A MOMENT TO REFLECT ON TIMOR-LESTE’S STRUGGLE

Tuesday, March 18, 2014Posted in Travel Tips
It’s hard to comprehend the brutality that descended on this tiny island nation – first when the Indonesian forces invaded it in 1975 and then when pro-Indonesian militia groups sought to exact their revenge on a country that voted for its independence 24 years later.
Two hundred thousand Timorese lives were lost as the Indonesian army swept through the country seeking to annihilate any resistance.
Now, 14 years after the country gained independence, there are uplifting signs of a resilient and determined people persevering against the odds – a determination, perhaps, reflected by this one legged boy playing soccer in the monsoon rains who has learned to extract joy from life’s smallest pleasures. 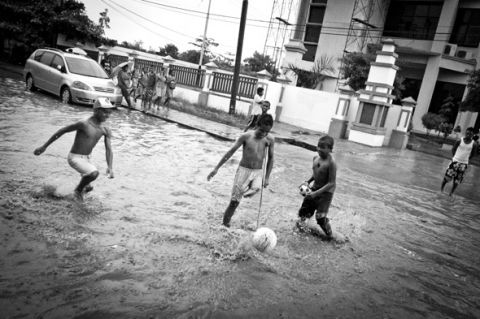 « “TRAVEL PIC” FROM TIMOR-LESTE….WITH A “BIG PICTURE” IN THE MAKING
SHOOTING “TOURISM” PICS IN TIMOR-LESTE…..and a few black and whites. »