“TRAVEL PIC” FROM TIMOR-LESTE….WITH A “BIG PICTURE” IN THE MAKING 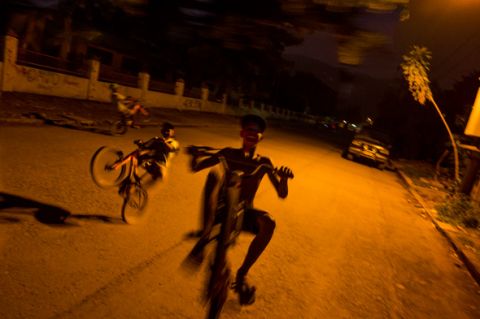 A “Travel Pic”. Opportunistic photography on the streets of Dili, Timor-Leste

In my previous post, I wrote about the difference between a travel pic and a tourism pic – this one (above) is a good example of the former. It was captured wandering around the country’s capital, Dili, yesterday after nightfall and, while it isn’t likely to burn an indelible impression in your mind in terms of making you want to come here, it’s an interesting editorial shot which will work well as part of a pictorial essay on the destination  (….and, from a marketing perspective, it also subtly says the streets are safe to wander at night).

Tomorrow, I head up into the mountains to a remote village in the Maboro District in the west of the island to photograph waterfalls, hot springs and some amazing traditional architecture which I saw featured in an archeological magazine I stumbled across. As I wrote earlier, I’ll now conceive a “big picture” and plan around the features and whatever I can place within the frame to promote Timor-Leste.

If all goes well, the photographs will feature in my next post.