More than 30 years have passed since I set out to travel South Africa.

My first attempt saw me heading south across the continent’s Sahara desert from Morocco with a bedouin camel train, though it ended somewhat abruptly when a frothing Algerian soldier put a gun in my mouth and suggested it would not be in my interest to continue (certainly, there was no argument from me).

My second effort came several years later but my fascination with tribal cultures saw me distracted by Papua New Guinea and a love affair with the many amazing cultures of the South Pacific which continues to this day.

So you can imagine my excitement about finally arriving here.

Last night, in Durban, the country’s third largest city, I met the team from South African Tourism. Lalie, who recruited me for the assignment, epitomised the friendliness of everyone I’ve mete so far. She had a big, winning smile and shook my hand at our introduction but parted with a huge hug and a genuine invitation to enjoy her country.

I meet my guide for the next two weeks this morning and we set off – just the two of us – on a drive around South Africa, capturing photographs which will form part a promotional exhibition to be held in Sydney in a few months time. The itinerary is flexible and includes a visit to Nelson Mandela’s birthplace and a five night stay at the exclusive Samwari, Eagle Crag Safari Lodge which boasts close-up encounters with “The Big Five” – Lions, Rhinos, Elephants, Buffalos and…. (hmmmm, what is the last one?). Fourteen days later, my tour ends in Johannesburg with an arrangement Lalie and I have begun making to capture a serious “Hero Shot” to promote South Africa.

Its 3am in the morning. Can’t sleep. I couldn’t be more excited about being here. 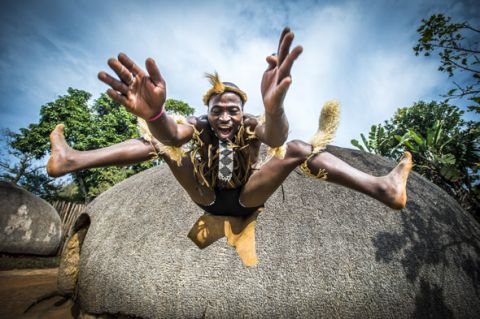 He’s not the only one jumping with joy