Not since wandering the world as a travel writer more than two decades ago have I written a property review. Nor do I give tips for service unless its exceptional – really exceptional (it’s an Australian thing. We’re all cheap).

However, I will have done both by the time I leave the Shamwari game reserve in the morning.

Like the opportunities I’ve had to photograph the wildlife here, my experience at Shamwari’s AUD$550 a night Eagle Crag Lodge has been exceptional. “Please follow me sir, we have arranged a table by the fire for you to enjoy your breakfast,” was how it began – and it just got better from there. Luxuriously appointed common areas, one of nine sumptuous private villas to retreat to (below) and food that was consistently exquisite.

But it was the attention to detail that was most impressive – a parchment, rolled and tied with a ribbon, laying on my pillow with a short African fable to read before I went to sleep every night; a host waiting on arrival at the end of the chilly winter tour with a warm, scented hand-towel and a small cup of hot chocolate; the offer to come to my room after nightfall and escort me to the Lodge’s restaurant for dinner. In one particular occasion on tour, we went ahead of the elephant herd I’d been photographing to the opposite side of waterhole they were meandering towards and a makeshift table was set up on the front of the jeep. With the elephants lumbering towards us in the distance and the sun setting behind us, I was invited to a gin and tonic and a range of tasty canape’s. Surely, I thought, this is as good as it gets.

And then there were the two young tour guides – Dillon and Jessie – who were assigned to me over the five days. Both were outstanding guides – knowledgeable, courteous and passionate about the animals – but it was Dillon’s particular attentiveness that continually impressed me. Raised on the land, he’d defied his father – a game hunter – to become a conservationist and overcame considerable odds (“it was tough being dyslexic”) to graduate as a park ranger. He was quiet and unassuming but, from the moment we left the lodge, my priorities became his as he set off on a mission to find the animals I needed to make the assignment successful. He would drive (with extraordinary skill I might add) and stop close to the animals then delicately re-position the vehicle to where I had the best possible vantage – narrow breaks in the bushes, perched on the rocks, angled so I could just sight the animals through the trees. Then, as if to read my mind (ok, maybe a pause in my camera’s motor drive gave it away), he’d ignite the jeep and we’d head off again – both of them now diligently reading animal tracks and droppings, determined to find me that one animal I was yet to photograph.

So, should you be considering adding a South African game reserve experience to your bucket list (and what bucket list would be complete without it, he says), I could not recommend more highly Shamwari’s Eagle Crag Lodge (www.shamwari. com) and Dillon or Jesse as your tour guides. You may save a bit of money going elsewhere but, when you’ve come this far, it makes sense to pay a bit more to have your expectations exceeded – as mine clearly were.

Post Script: Oh, and that charming offer I mentioned earlier about being escorted from my villa to the restaurant at dinner time. Had I have paid more attention, I would have heard they were actually offering a security escort to prevent an attack by wild animals, which – remarkably – had occurred in another game reserve not so long ago. A woman, returning from dinner, was killed by a leopard who got past the electric fence. Even after I heard the story, I didn’t think much of it until, in darkness on the morning of my departure, the security guard grabbed my bags and disappeared ahead when I turned to retrieve something I’d left in my room.

….Strange how the slightest rustle in the bush can catapult you along the walkway when you’re on your own after you’ve just spent five days in a big game park. 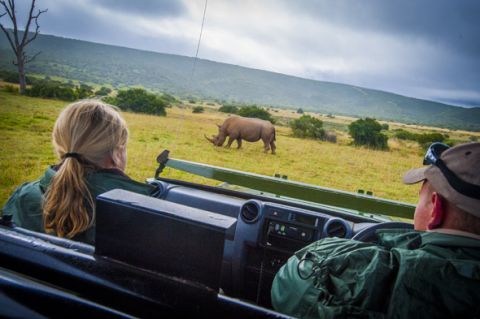 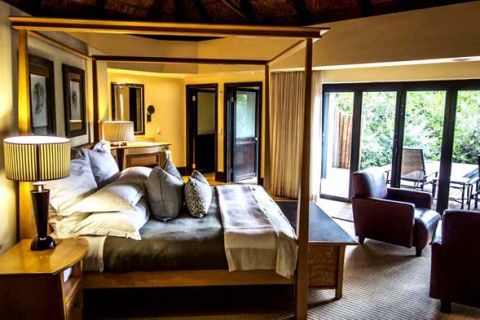 Next Post: A preview of the best images captured during my South African adventure.