Don’t you love it when the commissioning tourism authority lifts the bar just slightly and sends you the travel section of Vogue Magazine as part of your brief and says, simply, match this (no matter you won’t have a stylist, you’ll have to scrounge for wardrobe and props, and that the talent will be local “ring-ins” who will only be available between taking the kids to school or when they’re not working. Oh, and it’s a big region; you’ll need to travel several hundred kilometres to cover everything on the eight page Shot List.

…So began the seven day shoot I’ve just completed of the Daylesford Macedon Ranges region of Victoria which is centred about an hour’s drive north of the state capital, Melbourne.

To replicate the Vogue look, I needed to produce a range of stylish, up-market pics – largely devoid of people – with plenty of space to overlay text. I’d also need to shoot graphically strong, closely cropped images and some food and textures – delivered in a stylised de-saturated colour palate.

The virtue of this style of presentation I hear you ask? Well, combined into, say, a seven page magazine spread, the photographs particularly lend themselves to telling a story and giving you an overall impression of what’s to be enjoyed in the destination. As you’d expect from Vogue, it’s a handsome look and its well suited to a region which definitely has a touch of Europe going on and is looking to distinguish itself from the competition.

That said, I’ve also been mindful to shoot a range of more colourful, stand-alone “tourism” images for wider application (and I can always take the others back to similar colour levels if the client prefers).

Here’s a short preview of some of the photographs that resulted from the assignment – the de-saturated “Vogue look” in the storyboard to start, and a preview of some more typical tourism images focusing on the region’s virtues (its reputation as Australia’s Spa capital, its scenery, its charm and, of course, the fact that Picnic at Hanging Rock was shot there). 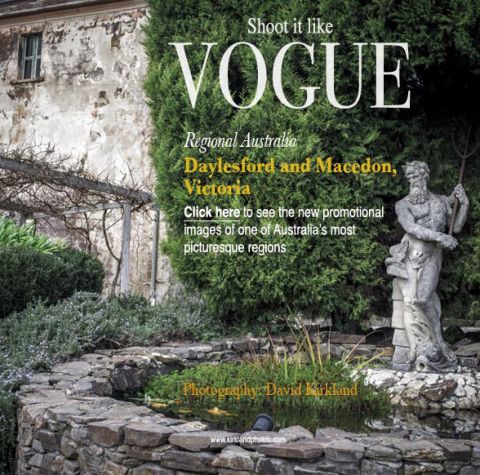 ……and here’s a few less stylised promotional images (Click on the picture below to scroll through the preview) :

« WATER, WINE AND PICNIC AT HANGING ROCK
DRAWING ATTENTION TO THE DISAPPEARING CULTURES OF THE SOUTH PACIFIC – MY FIRST INTERNATIONAL EXHIBITION. »