As I wrote about a year ago, Jimmy has visited several remote locations around the world and captured some truly beautiful images of disappearing tribal cultures which he has compiled into a book. Stunning, rich, well-lit portraits and group shots of tribes in Mongolia, Africa, South America and the South Pacific, largely shot on a large format camera and meticulously arranged into settings of a bygone era. The photographs are a timeless work, well deserving – at least in my opinion – of the highest of accolades.

However, just recently a photographer friend in Papua New Guinea sent me the following link as entertainment:

It’s of an interview published earlier this month in the Guardian which Jimmy did about some images he shot in Papua New Guinea. In the article, Jimmy refers to some grand, two week trekking adventure he went on to capture pictures of a remote group of Huli Wigmen standing in front of a waterfall. The story was comical, inaccurate and misleading about Papua New Guinea, attracting the ire and comments of many photographers, some of whom – like me – have stood at the same waterfall he shot. In fact, the waterfall is just a short walk from the country’s premier wilderness lodge which is a stones throw from the highlands highway and an airstrip. Fraud! rang the comments of many who had walked in his footsteps (or probably not if you are to believe Jimmy). Serious accusations of blatant plagiarism also surfaced from Jimmy’s past including this visual comparison (below) of  a picture Jimmy  did, against one captured by Mitchell Kanashkevich years earlier. “Nelson basically went on the Internet, found photos that people had done, then copied them for his portfolio,” said the accuser. Ouch.

Struggling to reconcile the comments with the sort of person I presumed wandered the world to produce such superb photographs, I followed a link onto this video clip which, sadly, says it all  (I couldn’t go beyond the preview).

In closing, my admiration for Jimmy’s photographs has not diminished. They are a fine body of work drawing attention to the vulnerability of traditional tribal culture. Even his most ardent critics would have to acknowledge the sense of integrity and honesty he has managed to capture in the people he has photographed.….. it’s just a shame the same can’t be said for the stories he tells about how he came to photograph them. 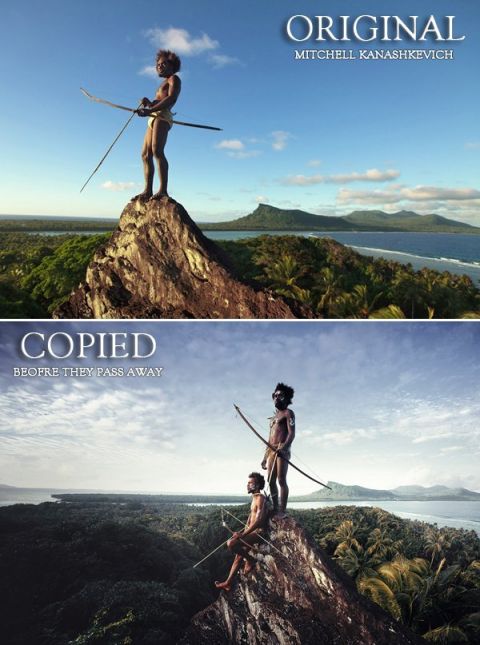