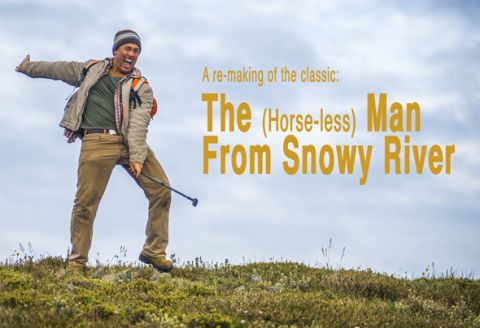 From the moment he turned up, you knew Steve Maxwell was the man for the lead role in the Victorian High country photo shoot.

It was always going to be him – an actor (and a Qantas steward in-between gigs) – plunging down that mountain ravine, leaning back on his horse in that classic scene from The Man from Snowy River movie.

The only problem was we didn’t have a horse and the tourism authority had moved on  (i.e. to marketing great food, hiking, the High Country scenery etc).

Still, as this picture indicates, that wasn’t going to stop him.

But what a delight it is for a photographer to have an actor on the shoot as talent. There wasn’t a moment I pointed my camera towards him where he wasn’t acting or for that matter, helping everyone around him play the role he knew I needed for the photograph. Every setting produced several different poses – each delivered before I even got close to opening my mouth to offer direction.

What a pleasure he made the shoot (thanks also Nadia and the kids) – and what a productive assignment.

…..by the way, if you’re ever in need of a non-stop action man who’s played in the TV series Spartacus (he was probably the one decimating entire legions), I know just the guy.