At the start of last year, I set my trajectory to becoming a fine art photographer by 2024 .

Since then, amid my usual workload, I’ve made some inroads having published a fine art coffee table book, mounted two photographic exhibitions and seen my work hung permanently as featured art in an overseas resort.

But the process has revealed the evolution I’m seeking is likely to be slow – at least while the majority of my time is spent earning a living (the lament of many a creative person I’m sure).

So, as 2014 comes to an end,  I’ve decided to take a detour in the year ahead and concentrate on developing three passive income streams which will allow me to travel with more time to pursue my interests as a photographer and a writer. To do this, I’m looking to add value to the photographs I capture – not just to create an immediate return but to create an on-going return that will require less involvement on my part after, say, five years.

Here, as I did about this time last year  (Ten Year Plan), is me using the dawn of a new year to review and focus my ambitions.

In 2015, I will create a new commercial vehicle to sell photographs – mine and the work of other photographers. The entity will be separate to the work I do for tourism authorities or the images I supply to international photo libraries which represent me. It will begin with the building of a dedicated photo library on one destination (possibly Vanuatu) which I have already photographed – the images I have captured becoming the foundations of a much broader commercial library.

The on-line library (Mock-up entrance page below) will be fully automated to supply high resolution images and retrieve payment, offering immediate access to thousands of photos and limited edition prints captured of the destination at highly competitive prices.

I’d envisage it will take two years to build the library (the time required to caption and meta tag all the images being the most daunting prospect as I’m the only person who can do it). We’ll launch it in six months and I’ll add to it through at least two dedicated assignments before 2017 to broaden the range and lift the number of images to a viable commercial level, by which time the library will be established in the marketplace and we will have refined the model enough to apply a similar template to other countries. 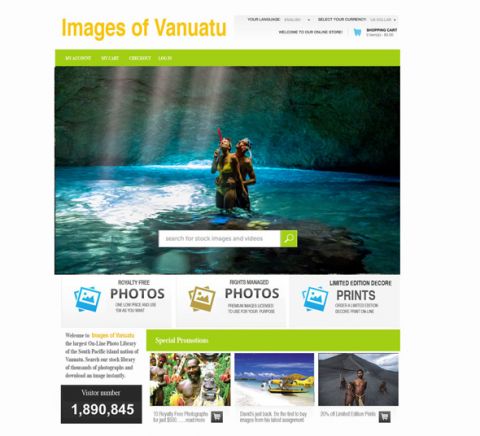 The second passive income initiative will focus on ramping up the activities of my publishing company, Frontier Publications.
In my bid to meet my assignment commitments last year, I took my eye off our publishing ventures, adding just one book in 2014 to the 13 books we’ve published to date. In the new year, we will conceive a new style of souvenir book to sell in the destinations I have photographed. At the same time,we will seek publishing partners for several other books I’m planning that will require international distribution.

3. Packaging Photographs and Stories for the media as a travel photographer.

The third passive income venture on the cards will see me working on syndicating a travel feature for magazines and newspapers – maybe six features a year – which will combine photographs I’ve captured and a travelogue I’ll write with lessons on photography tailored to a specific destination ( ie best places to photograph, right time of day, tips etc). While it’s unlikely to be lucrative initially (I left travel writing more than two decades ago because there was no money in it), I’ll look towards syndicating the features and attracting sponsors. The endeavour will see me feeding my commercial libraries, broadening my contacts and elevating my international profile to create new opportunities. Most Importantly, it will see a slower – hopefully, a more considered – pace introduced to my journey which will allow for a return to the pleasure I derive from traveling widely, photographing subjects I enjoy and writing about the things that capture my interest.

And what measure of success I hear you ask?  Well, by the end of 2015, I will have launched the prototype of my commercial photo library on an overseas destination, I will have published two new books and I will have conceived the editorial package for syndication and approached several media outlets to get it off the ground.

…. That, on top of my assignments (eight already commissioned), should see me pretty busy in 2015 and back on track in 2016 with more time to spend on realising the goal I’ve set to become a fine art photographer specialising in traditional culture.

To end, I’m reminded of this quote I read recently::

“Don’t let anything stand in the way of you claiming and manifesting the life that you choose rather than the life you have by default.”