PHANTOM SALE – IS THIS WHAT A $6.5 MILLION PHOTO LOOKS LIKE? 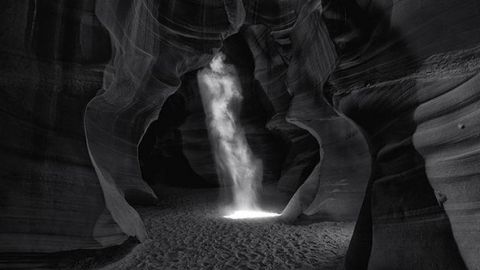 It’s official (at least if you believe the press release from his PR company and you accept the loot was forked out by an anonymous buyer and that there’s been no creditable verification of the sale), that Peter Lik’s black and white photograph titled “Phantom” (above) has sold for US$6.5 million.

The payment would make it – by far – the most expensive photograph ever purchased.

For those who aren’t familiar with Peter, he’s the Australian landscape photographer who moved to America and has done incredibly well for himself (14 galleries at last count, though maybe 13 given Noosa closed down last year) trudging through snow, leaping ravines and descending into the bowels of the earth to capture his panoramic images. In the States, he’s the Mick Dundee of the photography world (sorry Hoges). Once seen bounding the terrain for the American weather channel, this Aussie action hero, armed with his Linholf camera and tripod, dressed in a cowboy hat, sleeveless shirt and over-the-top Australian accent, clearly has a penchant for self- promotion claiming to be the “world’s most influential fine art photographer” and “one of the most important artists of the 21st century.” My favourite Peter Lik story (and I suspect we admiring photographers all have at least one) is a video clip which used to be on his web site that began with the sound of a helicopter rotor, then burst into a scene of Peter poised at the open doorway demanding the pilot urgently land him on a barrier reef atoll below “quickly, before the light changes.”

As you’d expect, the announcement of Peter’s Phantom sale (surely that’s not what I meant), attracted some pretty serious scepticism, particularly from the art world media which savaged his work and suggested the sale was a stunt (in Pete’s defence, you’d wonder why no erstwhile member of the Forth Estate has put in a phone call to give him the opportunity to prove them all wrong and verify the sale).

For my part, a quick surf on the internet and a look at Peter’s work being sold on  e-bay reveals a very similar photo – “Ghost” he called it, only it was in colour – being auctioned as a print for $200,000 (though no bids had been received with only a few days to go). The description at the bottom of the image reflected on the value of the photo – and perhaps the real value of his headline-making exercise – pointing out that one of the same photographer’s photos had just sold for $6.5 million.

Phantom: Noun (Fan-tuh m).  1. An appearance or illusion without material substance, as in an optical illusion. 2. A person or thing of merely illusionary power.