TWO CYCLONES – THE GODS ARE NOT MAKING IT EASY 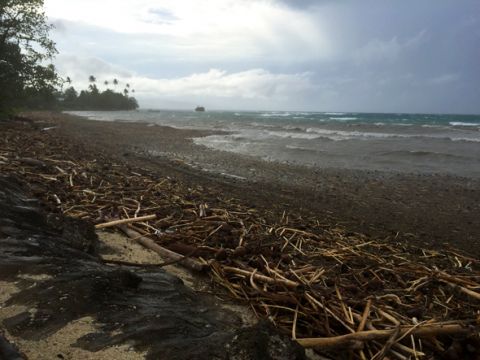 …not quite the conditions we were hoping for

So much for shooting a pristine beach with a stunning island in the background.

To add to my woes, Colin, my counterpart from the tourism authority, is down with “Malaria.”

We’re here for the next five days for Stage Two of plans by the national tourism authority to make the northern islands  a tourism hub for Papua New Guinea. Direct flights have started from Cairns to East New Britain; the imagery we will be producing will go towards the promotional collateral used to market the islands as a destination.

It’s a expensive phase. We’ve flown in talent from Sydney and made arrangements around the reconnaissance we did three weeks ago when I was here. Everything has been tightly planned (as much as you can do in PNG, he adds). We only need the weather to make it work.

One day, that’s all I’m asking for. Just one day of fine weather and we’ll get what we came for.

« DARK DAYS WAITING IN PNG AIRPORT
TAKING ONE FOR THE TEAM »