TRAVEL PHOTOGRAPHY TIP 60: THE IMPORTANCE OF RELATIVITY IN TOURISM PHOTOGRAPHY 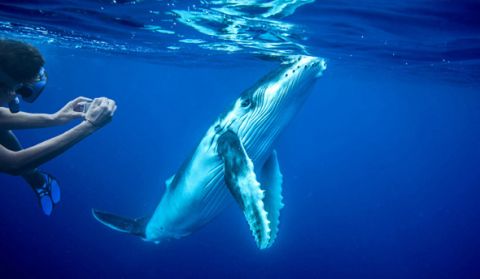 Up close and personal to a humpback whale calf

I head for Western Australia in a fortnight to photograph the Whale Sharks on Ningaloo Reef – a challenge more likely to be determined by the weather and the clarity of the water, as much as my ability to position a 12 metre, 21 ton leviathan in front of my camera.

And herein lies a good lesson for travel photographers.

If I was a wildlife photographer shooting for National Geographic, it would be a different matter (ie I should expect to be shooting a spaceship-like creature sucking in an ocean of plankton, captured from inside the whale Shark’s mouth etc). But that’s not what I’m there to do. I’m there to record an exceptional experience which will entice tourist to this Western Australian region by showing them they too can get up-close and personal with one of these magnificent creatures in their natural habitat. And, in my view, the best way to do that is to capture people in the water with the whale shark so the viewer can see themselves right there in the water alongside them.

I did something similar in Tonga when I was swimming with a Humpback Whale calf  (above) and again when I was on a safari in South Africa (below). On both occasions, I chose to shoot through people to my subjects to give my viewer a greater sense of the experience and vicinity to the subject. Both images are now used widely to promote the destinations.

It’s a technique worth baring in mind when it comes to shooting wildlife for promotional purposes.

Next Stop: I fly out to Fiji tomorrow. 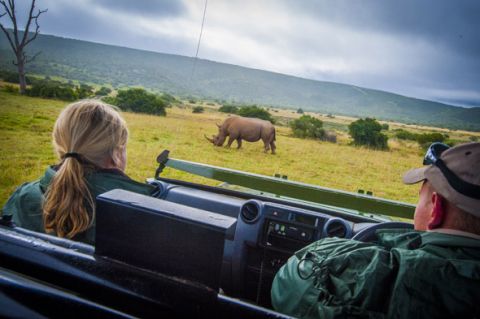 Shooting through people to place your viewer in the picture.