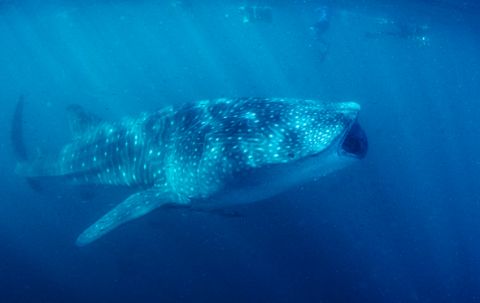 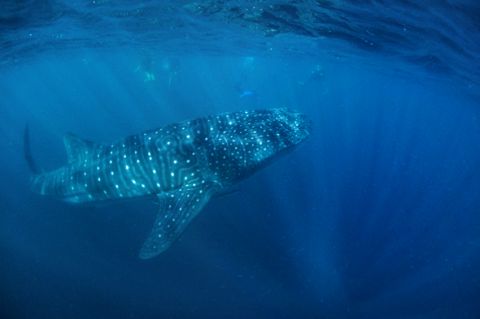 For all you photographers heading to the waters off Ningaloo Reef to photograph the whale sharks (above), here’s a few tips you might find helpful (I’ve started with the assumption you have an underwater camera):

– First big tip: Keep out of their way. At up to 60 tones, they ain’t gonna swim around you.

– I went with the tour operator Ningaloo Blue which I couldn’t recommend more highly (veteran captain, super helpful crew and generous on board photographer genuinely eager to help you get the pic you want. Well done Esther).

– Don’t get discouraged by overcast skies as bright, sunny days pick up particles in the water which diminishes clarity.

– No flashes, no tanks and take an ultra-wide angle lens if you have it ‘cause there’s a lot to fit in.

– Learn from the frenzy that will unfold on your first drop off  as everyone (including you) scrambles to see what they have come for. Understand it’s likely there will be several opportunities and that some people will be happy to sit out the subsequent swims once they have seen the whale shark, which will make things a lot easier for you.

– Pay attention to your guide’s instruction and hand signals. They point in the direction the shark is heading.  We swam in two groups of 10 people. If you’re in the second group, watch  the first group in the water to see how it all works.

– Try to be at either end of the line in the water because floating in the middle means you’ll have to swim around/over/under whoever is to the left or right of you (or, worse still, they’ll just swim over the top of you).  At very least, you’ll probably have someone else’s fin in your face or a body between you and the whale shark.

– Pace yourself (ok, wasted warning as you’ll be too excited when you see them if it’s your first time). They don’t move quickly but it’s still likely you’ll need to swim hard to keep up if you want that photo that will make the difference.

– Understand your photographs will be dictated to by the conditions – particularly the water clarity. Many of the impresssive pictures you will have already seen have been captured in crystal- clear water and optimal conditions. Best pictures, in terms of colour, are when the whale’s close to the surface and catches the light. Anything deeper than three metres without flash, and you’re looking at that blue hue in every pic.

I should probably add, my first day out with a whale shark was a bit of an anti-climax – sort of like attending a much anticipated dinner party only to have the most interesting person in the room drift past you without paying the slightest bit of attention. But the second time, we snorkelled alongside eight feeding whale sharks and it was amazing (as I wrote earlier, my highlight was when one swam directly towards me). In short, a top day, great experience and well worth the effort.

Next Assignment: Ethiopia (I leave tomorrow for up to three weeks…yahoooooo!).