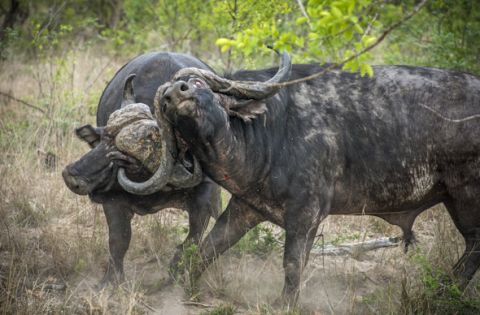 It would be hard to imagine the force involved in this conflict as two Cape Buffalos fought for dominance of the herd. The battle raged for about 20 minutes. Locked by their horns in mortal combat, at times they rose onto two legs, heaving against oneanother to land a lethal blow, then smashed through the surrounding foliage to gain leverage until one gave in and ran off – chased by the other.

The scene unfolded while I was on safari during my last day at Mala Mala Wildlife Reserve, adjoining Kruger National Park.  I shot it from the relative safety of my jeep which, I can assure you, stood ready to take off the minute the battle spilled towards us.

While probably only one of the pictures will make the cut as a promotional photograph for Tourism South Africa, I thought the series was too powerful not to post (look at how the horns are tearing away at their cheeks).

I’ll post a short preview of the South Africa shoot shortly….. when I get over this wretched jet lag.