ON SAFARI IN SOUTH AFRICA 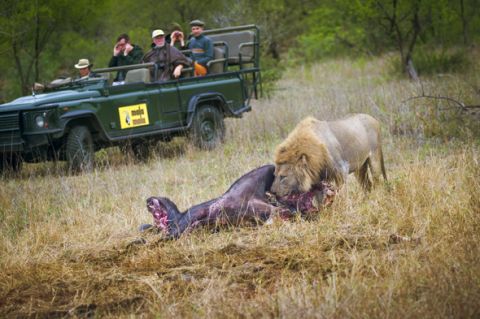 Above: One of five lions chomping on a Cape Buffalo.

I’m at the end of my first day out on tour at Mala Mala, the largest private game reserve in South Africa, and we’ve already seen the “Big Five” (Rhinos, Elephants, Lions, Buffalos and Leopards – including this one (below).

I’ve got pictures to process and a 5am start again tomorrow but I’ll post more images later in a final preview of my South Africa assignment.

Postscript: As I was typing this, there was scratching at the door of my bungalow which I presumed was the small monkeys I’ve seen around. I opened the door to the darkness to be met by the snaking trunk of a towering elephant less than a metre away, munching on the bougainvillea directly overhead.

Not so remarkably, I think we both pretended not to see each other; she continued to eat and I closed the door.

And now, looking out from my balcony, I can see hippopotami – five of them – wandering up from the river, grazing not more than 20 metres away.

What an exceptional life experience this is. 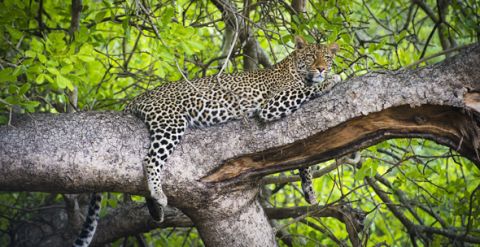 « VOTED BEST CAFE AND COFFEE IN THE UNIVERSE
FIGHT TO THE DEATH – WILDLIFE PHOTOGRAPHY, SO MUCH A MATTER OF BEING AT THE RIGHT PLACE AT THE RIGHT TIME »