I’m sitting at Perth Airport on my way home, finishing off a second assignment for the regional tourism authority of Western Australia’s Coral Coast.
While we struggled with the weather initially, we made up for it thanks to the handsome talent who travelled with us (well done Rose, Bec n Harry), and the flexibility of our itinerary which allowed us to shoot opportunistically when we got the windows of weather and light we needed.
As you can see (preview follows), we also had some great props – i.e. pink flippers and mask, a colourful beach umbrella and an attractive wardrobe which were sourced in anticipation of particular pictures we were going after (well done Tash).
And, we were lucky. The shiny four wheel drive vehicle you see on the beach which looks like it’s come straight out of a car ad, belonged to a lone fisherman who was clearly enjoying his moment of solitude when we descended on him at sunset and seconded everything you see in the picture.
Over the 10 days we buzzed around coral gardens on underwater scooters, played on a variety of water toys, took to the sand dunes on quad bikes and sailed in emerald waters off the coast so, as you’d expect, we found some pretty attractive backdrops to shoot against.
And, again, there were plenty of whale sharks outside the reef  – though we captured them in the last shoot (click here for preview) so this time, we happily stuck to the beach.
All up, a very productive and enjoyable shoot that re-enforced what was captured last time and delivered some fine images to promote the region.

Well done team (…..It’s just a shame Fiona wasn’t there to join us, he says).

Next Stop: The Solomon Islands on the first of a series of assignments to deliver a photo library for the country’s national tourism authority. 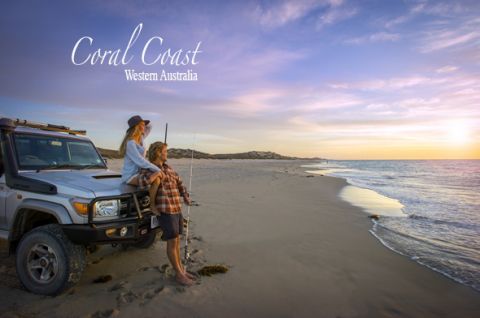