SWIMMING WITH THE MANTA RAYS IN THE SOLOMON ISLANDS 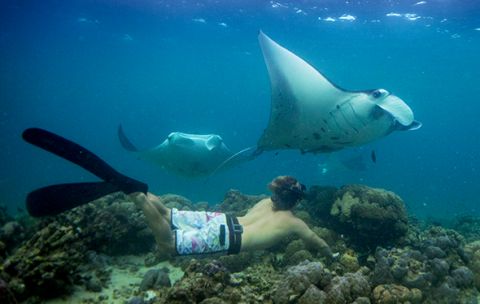 Swimming with manta rays off Uepi Island in the Solomons.

Now this is an exceptional experience – swimming with a school of manta rays in the Solomon Islands.

I’ve headed out to photograph manta rays on several assignments in the South Pacific – each time without success – until today.

In fact, my last attempt in Micronesia nearly killed me as I stupidly tried to get ahead of three of them in a strong current and vomited into my regulator at about 20 metres from over-exertion before making a dangerously rapid ascent (yes, all you diving devotees, I have since been informed I can vomit into my regulator and stay underwater).

Hence, a distant blur is as close as I’ve come to photographing manta rays so you can imagine my delight to be surrounded by five of them in relatively clear, shallow water for about an hour with two free divers happy to swim around and be part of the photograph (well done Kate and Jason). 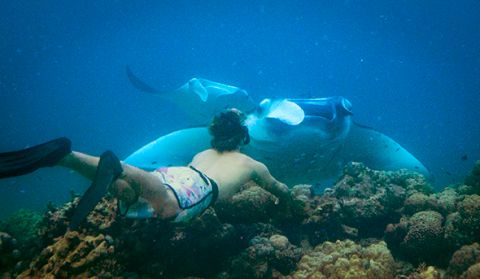 With their large, white underbellies flashing against the blue backdrop, they’re such exquisite creatures to watch – surely the most graceful beneath the surface – hovering over their cleaning station like giant winged spaceships; able to disappear almost instantly with the slight unfurling of their two metre wings.

And thankfully (unlike the frigging whale sharks off Western Australia, he says), I didn’t have to swim frantically to keep up with them; they circled playfully, sometimes gliding straight towards me before effortlessly peeling off within arm’s length.

A mesmerising engagement; what an absolute joy.

This ranks as my second exceptional underwater encounter – the other was swimming with the humpback whales and their calfs near Vavau in Tonga several years ago.

And, like the whales, the mantas were almost enough to see me put my camera aside and just enjoy the moment (….I said almost. I’ll add a few more pics to this post when I get back).

In the meantime, here’s a few quick tips for those planning to photograph them:

– Find a position close to the cleaning station and wait there as they are likely to come to you.
– Use a fish-eye lens – there’s a lot to take in with the two metre wing span and, if you’re lucky, several mantas.
– Plan to shoot when the water is likely to be at its clearest (I was told at low, incoming tide to the lagoon, these were shot on hight tide).
– Be wary of shooting into a light source (the surface) and blowing out your highlights.
– Ideally, do it more than once and learn from the first experience in terms of positioning, exposure, the manta’s movements and composition.
– I underexposed my shots by a stop, preferring to shoot for more detail in the white underbelly.
– As with most underwater photography, you’ll need to apply a fair bit of post production work to return your images to the colours you saw. Wait a few days after you’ve processed them before coming back to complete the final colour correction as a bit of distance is likely to bring you closer to reality and a more pleasing picture.

And, finally, be prepared to count your blessings if the Manta Rays are there. As I began this post, I’ve been on several excursions – all with rock-solid assurances that I’d see them – and seen nothing.