PHOTOGRAPHY TIP 68: SHOOTING HALF ABOVE THE WATER, HALF UNDERWATER 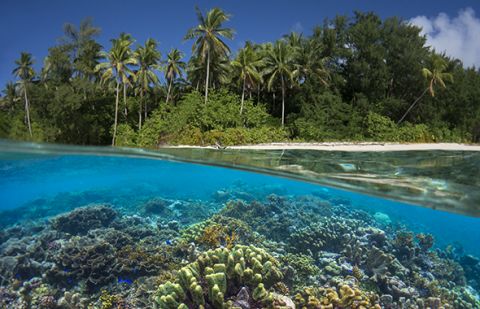 A typical half and half shot, captured in the Solomon Islands

As diving and snorkelling have been important draw cards to the destinations I’ve been shooting lately, I’ve spent some time playing with half-and-half underwater photography (above). Fact is, it ain’t easy to do well so, for those more technically inclined who are interested, I thought I’d post a few helpful hints:

– Equipment: You’ll need an underwater housing for your camera and a dome. I use a compact camera Sony RX100 and a detachable fish-eye dome (pic follows) which gives me a few more options to play with. As underwater photography is a fraction of my work as a tourism photographer, this small, compact set-up is easy to carry and it’s served me well beneath the surface.

Settings: It depends on the light but I found 400 iso on manual settings worked for me. Importantly, I changed my settings in the water, often reducing my exposures by up to two stops to avoid over-exposing the subject I was shooting.

Preparation: Simple as this sounds, make sure your mask (and that of your talent if you’re shooting people) is clean and doesn’t fog. (It’s frustrating enough without not being able to see what you’re doing). Toothpaste the glass beforehand works best for me (though not always). The locals reckon the juice of a mangrove tendril also works. I carry anti-fog spray in the pocket of my board shorts as well.

Weather: Don’t even consider a half and half shot unless you have virtually no wind as the ripples in the water make it near impossible to capture what you’re shooting above the water and below the water simultaneously.

Light: Lightly overcast skies produce a more even and easier light to work with. A bright sun can result in burnt out highlights, extremes in lighting and it picks up particles floating in the water.

Location: Look to work in a protected zone with clear visibility, away from wind and currents (it’s a nightmare working in both – particularly with people involved).

Photoshop: Understand many of the shots you’ve seen (including the one I posted above) may have involved marrying together two shots. If you are happy to go down this path, I’d suggest shooting above water and underwater in two separate shots with the view of putting them together in Photoshop on either side of a water line which you should shoot separately as well. Do not expect to deep etch your swimmer and drop him in as it will never really look part of the picture. And you’ll need to spend a bit of time in post production getting rid of the water beads that may have scattered the surface of your dome (which you won’t see until you study the picture when you get back).

Take a lot to get a few: Be prepared to take a lot of pictures as successfully positioning the waterline and your subject/subjects in the picture can certainly be a challenge.

Depth: If you want a colourful snorkelling shot with coral, shoot your subjects swimming within a metre of the surface and expect to play with your exposures and  temperatures in Lightroom to bring it closer to what you saw beneath the surface. Anything deeper than about a meter, turns blue without artificial light. Again, a cloudy day with more even light works for me.

Promises, Promises: Half and half underwater photography makes for a fine addition to your repertoire as a travel photographer though – given what it takes to do it successfully – I wouldn’t be rushing to guarantee it to my clients on every shoot).