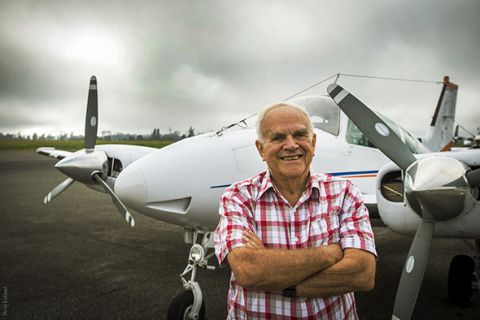 At 76, Bob Bates (above) has arrived where many people would like to be at his age, having built a network of successful, up-market wilderness lodges throughout Papua New Guinea.

He has lodges in the highlands, along the Sepik, by the lakes and rivers of the Western Province and on the coast. Seven properties in total – frequented largely by big-spending European and American tourists keen to experience, in comfort, some of the most exotic cultures and magnificent landscape on earth.

So, now, more than 50 years after he arrived in PNG from Australia as an engineer, Bob can look back on his achievements with some satisfaction and, well, largely do whatever he wants.

It would be fair to say that Bob’s not your average multi (he laughs at the suggestion he’s eccentric). Somewhat dishevelled in appearance (more comfortably casual and ruffled than unwashed I should add), Bob’s reserved and unpretentious manner projects him as an unlikely success story. He clearly doesn’t seek the limelight, preferring – it seems – to get things done rather than talk about doing them. So, when I asked him to pose for a photograph, he seemed genuinely perplexed, as if to say, why me, before concentrating his reluctance on whether he’d need to change out of his shorts or do his hair for the picture (as he later demonstrated, the wispy, white comb-over he sports has the potential to stand on end with a wind gust, producing a look reminiscent of a startled cockatoo).

As is often the case though, looks can be deceiving.

There’s a shrewdness in Bob’s eyes and a consideration in his words which, while few, are often direct and tend to carry a point. A sharpness of wit emerges as he appears to grow more comfortable with you; there’s the sense he’s a quick judge of character, that he has little patience for political correctness and that he’s unlikely to be easily persuaded to do something he doesn’t see a need for.

Are you a risk taker? “Definitely not – on a scale of 1 to 10, probably a 2,” he says.
Greatest pleasure: “Flying.” He flies a twin-engine aircraft which he parks at Mt Hagen’s Airport and he’s working through a bucket list of new places to fly to around the world. Croatia, the Marquesas, Zimbabwe have been the subject of some of his ariel jaunts. And he visited North Korea recently.
His home: “The highlands is my home.” He has a magnificent open-plan house above his Rondon Ridge Lodge, with heated floorboards and a giant glass wall through which you can look out across the breadth of the cloud-filled Wahgi valley. Like all of his properties, it was designed and built by his own hand, working alongside an army of locals.
Any prospect of building another lodge? “No, seven’s enough,” he says (….though he said that before he started Lake Murray, added his partner, Pauline).
What motivates him: Bob’s energetic, well beyond his years; he’s obviously a practical person who just enjoys building things. While Pauline hopes to relax and read a book on the weekend having shared a busy week in the office, Bob’s off to inspect the hydro system he built which feeds energy to the lodge then he’ll oversee the new presidential suite being added to the property.
Recent disappointment: His home was broken into and he lost the TV set and a prized aviator watch which was given to him as a gift. “I know the village of the person who took it and there’s been consequences.” he says cryptically. “But I doubt I’ll get it back.”
Vices: “I don’t have any,” he chuckles.
Obvious annoyances: The way the Australian media misrepresent the state of law and order in PNG.
His legacy: From the short time we shared and what I’ve seen of his lodges (I’ve stayed in all of them, bar one), Bob’s legacy will invariably be the contribution he has made to the local communities that surround what he’s built, and what he’s done for Papua New Guinea’s prospects as a fledgeling tourism destination. Each of his lodges provides an exceptional world-class experience that continues to draw favourable international attention to PNG.  He’s nationalised most of his staff and provided employment for thousands of Papua New Guineans since he became a tour operator back in 1976. And he’s well regarded by the employees I spoke to – hard but fair was the consensus. (“you don’t want to see those eyebrows lifting,” said one of his managers jovially).

So I’m sure history will record Bob as one of PNG’s great pioneers – a status likely to be reflected by a mourning procession – the most obvious measure of the regard in which a man is held in Papua New Guinea – which will stretch throughout the highlands when his time comes.

….. That said, you can’t help thinking, that if Bob has anything to do with it, the procession’s still a fair way off. 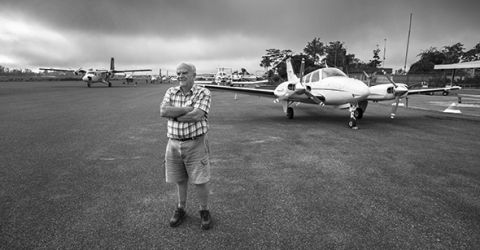 « WILDERNESS SHOOT IN PNG
ROOM WITH A VIEW »