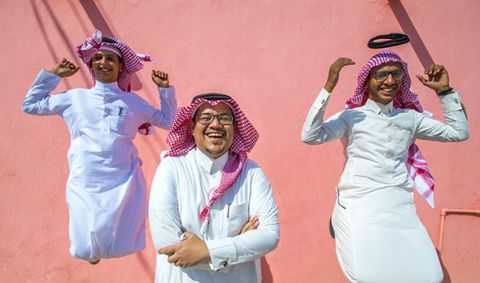 I’m starting to enjoy my shoot in Saudi Arabia (and, clearly, so are they) having finally rid myself of this wretched jet lag (that said, I’m still bursting out of bed at 2am before I realise I’m not six hours ahead of myself which is making for a bit of a long day).

We finish two days in the Kingdom’s most southerly province of Jizan, on the Yemen border tomorrow, then it’s off to Jeddah (a stone’s throw from Mecca), where I believe there’s an ultra-light aircraft with my name on it waiting to carry me away.

This is my third assignment to Saudi. I’m told I’m the only foreign photographer to be repeatedly commissioned by its tourism authority so I feel privileged as western tourism is largely non-existant (the Kingdom is yet to introduce a tourist visa). For that reason alone, it’s a pretty amazing country to travel and a great opportunity for some photography.

Anyway, I’ll post a few pictures later …  though the pic above made me chuckle (the hovering egal in particular).