NIUE ISLAND – INDEED, LIKE NO WHERE ELSE IN THE SOUTH PACIFIC

Niue, a tiny island about three hours flight north of New Zealand, demands to be photographed differently to anywhere else I’ve shot in the South Pacific.

No stretches of white sandy beaches and swaying palm trees here. Instead, it’s coastline is a battlement of jagged, volcanic cliffs, rising sharply from the ocean. In a dwindling light, the island stands brooding, moody and defiant of the thunderous waves that crash against her walls.

The assignment brief was to photograph to the tourism authority’s new promotional tag line,  “Nowhere like us.” They wanted images that stood out from their South Pacific competitors. The pictures had to be appealing to a mature demographic (45 and over), they had to be “real” (ie no posed shots or exadurated colours), and they had to capture the “feel” and “personality” of Niue. On the Shot List: Scenery, a traditional cricket tornament (Kilikiki), scuba diving, tourists soaking in ocean pools and engaging with the locals. And at least one “hero shot.”

Here’s a small sample of the photos supplied: 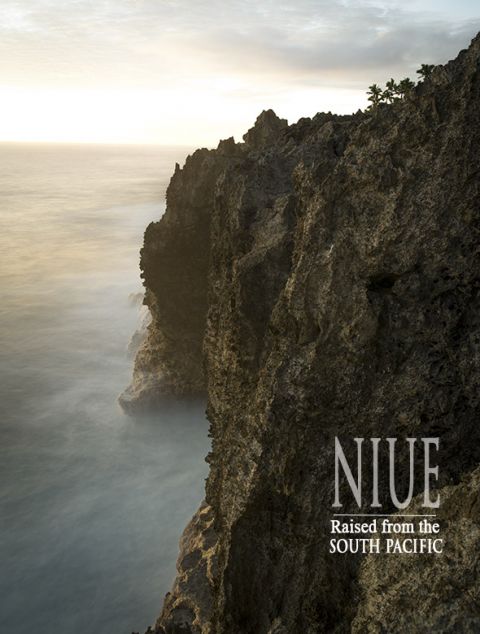 For more photographs of Niue captured during this and a previous assignment, visit the Niue Gallery of our library at www.davidkirklandphotography.com.

Now, I’d have to confess I was a tad anxious (read ageing rapidly) about the shoot a day after my arrival. The talent, I was to learn, was to be wherever we were lucky enough to find them, the forecast promised bad weather for most of the week, and the distinct visual culture I was seeking – that singular element I’ve shot with some degree of success in the past to differentiate one country from the next – simply didn’t exist as the local population (1,742 at the last census) is a melting pot of Kiwis, Tongans, Samoans and Cook Islanders. Added to that, it poured on the first day I spent driving around the island looking for insipration, the only visual distinction I could make of the largely flat, heavily vegetated landscape was that it was strewn with delapidated houses; and I had seven million billion tracks leading down to the ocean I had to explore to divine the best picture opportunities. Oh, and when it came time for the diving, I was off to photograph an underwater trench teeming with the world’s most venomous sea snakes.

So, yes, you’d be right to assume this was a long way from my earlier assignment …..in Tahiti.

But, here’s the thing, I thoroughly enjoyed my time on Niue because it really is so different to the rest of the South Pacific. And, as the days progressed, I became grateful that there was only a single flight a week linking Niue to the outside world as it gives visitors like me little option but to explore the island and look beyond that first impression.

Certainly, the locals couldn’t have been friendlier – from the woman who invited me to join her and her family for tinned beef and rice at the annual cricket tournament, to the elderly lady who waddled from her home to sell me a $5 coconut from her roadside stall  (“I’ve got a hernia but I still think I can get that one down for you if you want it.”) Or the two policemen who gave wings (though fleetingly) to Nuie’s own superhero for a fun photo we staged.

And a week is pretty well perfect in terms of the time you need to take in the island’s highights. Top Tips: Head for happy hour at Willy’s Wash Away Cafe on a Sunday (great sunsets), pull in for a chilled rockmelon and mint crush at Vaiolama Cafe, and chomp on some serious sushi at Avi’s Japanese restaurant. For exceptional experiences, bath in the emerald pools of Limu, explore the surrounding reefs at low tide, perch yourself at a lookout overlooking the cliffs and be mesmerised by the forces of the ocean at high tide and, well, dive with the snakes (‘cause it’s something you can’t do in many other places and – I’m happy to report –  they don’t bite).

But I digress; let me get back to photography. Niue’s distinctive appeal to visitors – at least in my mind – lies in the sheer physical presence of the island, along with the fascinating lifestyle of the people who have chosen to make it their home. It’s their stories – born from the island’s size, remoteness and inaccessibility – which makes Niue such an interesting place to visit.

So, it was that raw, rugged beauty of the island and a glimpse of the lifestyle of the people on it that I sought to capture in some of these photographs. While the most aluring promotional image may well be the panoramic photograph captured with the couple snorkelling at Limu Pools, it’s the more dramatic scenes in the top half of this selection which are likely to stand out in the competitive marketplace of the South Pacific. Used large (really large, as they’ve all been shot on a large format camera), they can only draw attention to Niue and invite questions from more curious travellers about what lies on the island for them to discover for themselves.