HERO PIC WITH THE DRONE ON AITUTAKI 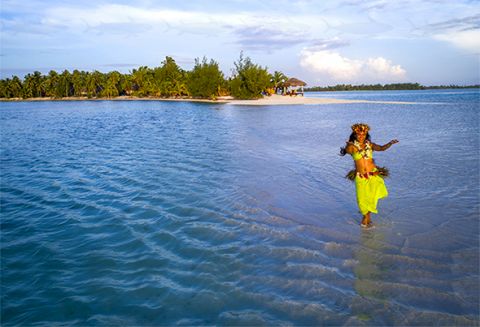 If I had any doubts as a tourism photographer about the value of using a drone, they disappeared when I captured this photograph (above) on Aitutaki.

It simply wouldn’t have happened otherwise.

I would have needed to position a ladder, it’s unlikely I could have anticipated the light or the tide in time, and I would never have got the dancer in position. Fact is, we had just a 15 minute window from when I saw the potential for the pic and raced back to grab the drone, to the sunlight disappearing and the sand bar the dancer was standing on being swallowed by the incoming tide.

And technically, I can’t fault the quality of the image. While this pic is obviously a low res image for the post, it’s a 50 meg Tiff file, with both the subject and the scenery sharply in focus (despite the heavy wind).

From earlier posts you will know this is my second assignment since I bought the Phantom 4 Pro, and I couldn’t be more delighted with the results (not to say the anxiety of crashing it has passed I’d have to say. In fact, I had a landing bingle today in heavy winds which, not-so-remarkably you might suggest, coincided with the arrival of my client. “Is this the first time you’ve flown it?” he said, observing my desperate effort to bring my flailing piece of equipment to a halt as it thrashed across the beach).

Otherwise, four days to go on Rarotonga Island before I head back from the Cooks largely satisfied with the outcome. Rain’s predicted for the next few days but I’m hopeful of at least a serious snorkelling shot in the resort’s marine sanctuary on the way out.

« A COUPLE OF QUICK PICS FROM AITUTAKI
AITUTAKI RESORT PREVIEW »