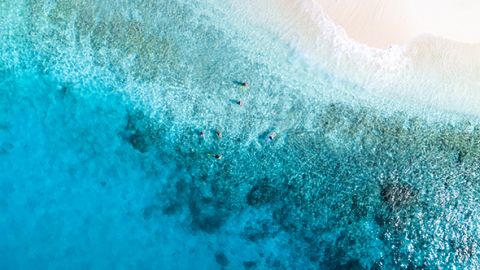 It gives me some satisfaction to report that capturing a drone photograph for promotional purposes draws far more on the experience of the photographer than the skill of the pilot (not that you don’t need to keep it in the air, he adds).

With a usual photograph, there are hundreds of combinations needed to get it right in terms of light, timing, composition, message and technique. With a drone, there’s all that as well – but with the entire new dimension of height to consider, and all the variables that come with it.

So, with all that going on, it still falls to the photographer flying the drone to anticipate when conditions will be optimal, which vantage is likely to present the best opportunity, what needs to be included in the shot to make it stand out, and what can be done in post production to bring it to international standards.

….It’s an important point to bare in mind (one, as you can imagine, I’ll be eager to bring to the attention of my clients who’s mate may happen to have a drone as well).

In the meantime, for those interested in flying devices with cameras attached, following is a short review of the Phantom 4 Pro, based on my recent experience on assignment in Fiji.

What it takes to fly it: I probably spent 10 hours watching Yu-tube videos to get the basics worked out and a similar amount of practice time before I felt confident enough to fly it and capture reasonable pictures. I did a few pics over Brisbane two days after I bought it. This one (above) and those in the previous post I did a week later over the Yasawa Islands in Fiji.

Flying it: Let me begin by saying that flying a drone if you haven’t done it before is half anxiety and half fun (actually, vastly more of the former in the initial stages if you haven’t taken insurance out) and, if it wasn’t for the five sensors that steered it away from obstacles automatically, I would have crashed it long before now – into trees, into my pool, into telegraph poles and into the side of a building. The automatic take-off (hovers at four feet) and return-to-home setting (particularly when you lose it in the distance against a busy backdrop) is a God-send…(unless you’re on a moving ship, he adds). You can master the basics in a few sessions – though I think at lot of practice is needed before it all becomes second nature (unless, of course, you’re a games console geek, in which case it’s probably all just fun).

Still Image Quality: I don’t know where they get the 20 meg file size from. I’m getting 32 meg raw files, 50 meg RGB tiff files and they are great. Auto-focus is simple to use and you can do your exposure and depth of field settings while you’re in the air to tweak to the conditions if you need to. Clarity, detail, true colours and speed – all very impressive for such a wee camera.

Movie quality: Certainly the quality is there and the 15 sec grabs are fairly easy to capture – particularly in Tripod Mode which moves slowly to give you that cinematic look. But it’s a whole new way of thinking in terms of packaging up even a short clip rather than shooting stills. To be honest, I’d enjoy mastering it but I’m not sure the return would justify the time involved – the flying and filming techniques, then playing in post-production. It will be a discipline to ensure I get the stills in the first instance without being distracted by what I can do with video.

Comparison with the Mavic: There was one on the ship I travelled on so we flew together and, I’d have to say, it was quieter and much more compact and versatile. There was no difference in the video quality. So, if I just wanted to play and get video footage of my travels and I wasn’t concerned about the still image quality (just 12.7 Megs), I would have preferred it for its convenience and the cost which was about half of what I paid for the P4Pro. It did seem less sturdy though – more like a toy. I guess time will tell ….for both models.

Tips: There is a discipline involved in using this technology (which, I’d have to say, usually escapes me). Slow, methodical preparation of the drone and being comfortable with its settings is certainly required to keep it in the air. That dangling gimble is way too vulnerable so, always pack it to move it. And I’d recommend getting the polarising neutral density filters which handles the extremes in light better, and downloading an App ( I use UAV Zones) that tells you where you aren’t alllowed to fly it. Oh, and checking to make sure you’ve updated your firmwear before you head out makes sense (if Fiji hadn’t had a strong internet signal, I’m not sure where that would have left me). From a professional perspective, be very careful about what you promise your clients as only exceptional weather is likely to deliver exceptional still images.

Summary: All up, I’m pleased I bought in at this level, particularly in terms of the quality of the still shots and the ease of flying. It has added an important dimension to my work and it’s already won me new business (it’s vastly cheaper than a AUD$800 an hour helicopter and more versatile in terms of taking advantage of the weather conditions). The priority now is to strengthen my portfolio with drone imagery. One encouraging factor to consider if you’re a professional photographer: As I wrote at the start of this post, there are bound to be people out there who can fly a drone better than you can but it’s still your experience, and the eye you have developed reading the light, that’s likely to place it in the best position to get that winning picture.

All this said, the drone might not cost as much as one of my professional lenses but I have a feeling I know which one will be around longer.

« FIJI CRUISE PREVIEW – WITH SOME PRETTY IMPRESSIVE DRONE PICS.
30% SAVING FOR AUSTRALIAN REGIONAL TOURISM AUTHORITIES WHO BOOK BEFORE THE END OF THE YEAR »