THE IMPORTANCE OF UNDERWATER PHOTOGRAPHY (ASSUMING YOU HAVE SOMETHING TO PHOTOGRAPH)

It stands to reason that the place a person chooses to spend their next holiday is likely to be the sum of its attractions – and the water, and what lies beneath its surface, can be a big part of the appeal – particularly in the South Pacific.

That’s why underwater photography has become an important dimension – certainly another dimension – to  the photography mix for tourism authorities, resorts and cruise promoters.

Underwater photography can immediately showcase the pleasure, and the exceptional experiences, to be had beneath the surface – from simply snorkelling with fish above a pristine coral reef, to swimming with humpback whales, whalesharks or giant manta rays. For divers, there are underwater caves to explore or encrusted ships and plane wrecks to investigate, sea snakes to be handled, sharks to be skirted or millions of jellyfish to swim through (….ok, so maybe that’s not everyone’s idea of a holiday).

But you get my point.

It needs to be recognised though that good underwater photographs are not easy to capture. Apart from a reasonable eye, some experience and the right equipment, they require time and – importantly – the right conditions ie water clarity, light and the appearance of the marine life you’re there to capture if that’s the case etc. As a tourism photographer who shoots underwater (I don’t take it too seriously as it’s part of my armoury, not all of it), I’m constantly having to warn my clients about the time likely to be involved in getting a good underwater shot, and that I’ll probably be missing another opportunity elsewhere – maybe several – to get the one we’re all chasing (….and, even then, I might not get it).

From looking at this range of a few of the photographs I’ve captured for clients since I started shooting underwater about five years ago, you might get some idea of what I’m on about. I’d say, on average, at least a day would have been invested into each of them. 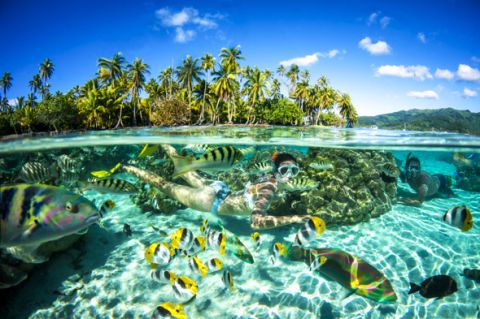 « A PLEASURE TO BE BACK ON ERAKOR ISLAND – VANUATU
RESORT ASSIGNMENT PREVIEW – THE HAVANNAH, VANUATU »