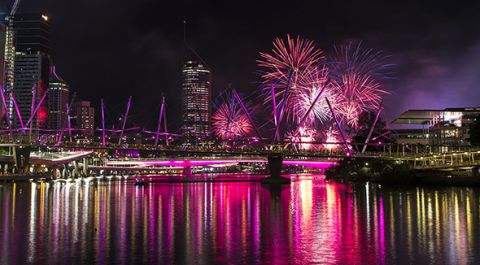 I had a go at shooting some fireworks yesterday for the first time (I’ve long wrestled with what an incredible waste of money it is – a hugely extravagant  first-world indulgence, while the third-world continues to suffer).

But I figure one day a client might want me to photograph a fireworks event so I’d best get it worked out in my own time.

Here’s a stream of things I learned which may be helpful if you’re also planning to play with fire:

Choose your location carefully, know where the fireworks are going off from and –  if it’s a city – where they will appear in respect to its main landmarks so you can include them in the picture. Surf the net if the firworks have been staged there before to help you choose the best vantage.

Know how long the fireworks will last so you can pace yourself. Anticipate restricted access and parking at the venue and know there is likely to be a huge crowd so get there early to stake your claim. Ensure you have a clear view to the fireworks and that they can be included in the frame. In terms of equipment, take a tripod and a remote switch so you can mimimise movement of your camera when you’re taking the picture. Once the sky lights up, try and shoot early before the smoke gathers. Be mindful of wind direction. Switch your camera’s focus to manual and lock on to something close to where the fireworks will go off so you don’t need to worry about focusing again. Be prepared to frame your photograph to what’s appealing to you and don’t move the tripod. Set your sights on getting one good photograph.  F8 to F11 worked for me. Shoot at iso 100 to minimise noise. In terms of speed, this is where is gets a bit tricky and why you should be on the ‘B” setting  so you are in control of how long the shutter’s open. Remember, there is a delay between when the fireworks take off and when they explode so you have to anticipate it (as best you can). There are also huge variations in the brightness which is why I suggest the ‘B’ setting. I found that opening the shutter for between four and eight seconds worked for me given I wanted those coloured streaks without blowing everything out, and that by holding the button down manually I could judge the brightness of the setting and take my finger off earlier if it was too bright and later if it was too dark. If you spend the first 10 minutes trying this and checking your shot, you quickly get a sense of what’s working – hopefully in time for the finale’.

I should probably mention that this picture (top) of Brisbane is likely to be far from my best if I were to try it again as I did everything I’ve just written about but when I went to jump on my pushbike and head for the Storey Bridge (which, sadly, qualifies as a Brisbane landmark in the absence of anything else),  I realised I didn’t have a light to cycle back with so I scrambled just to get to a nearby location along the river where I could even see the fireworks.

I guess my clients should grateful. At least it wasn’t on their time.