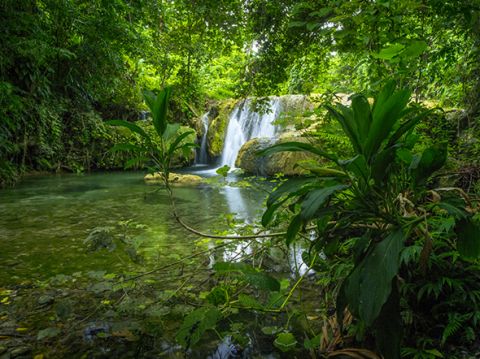 Above: One of the several smaller tiers leading to the top waterfall at Mele Maat (or Cascades) on Efate Island, Vanuatu.

It’s been several months since Efate’s had any rain (of course, that’s about to change now I’ve arrived, he says ##@!!) but, even then, there’s water flowing and some attractive swimming pools to be found. Imagine this pic with a couple of trekkers in colourful clothing, perched on that rock in the foreground or with their backs to the camera peeling away the foliage to discover this scene……..sounds like it has potential for a hero shot to me……don’t you think Rachel? (Rachel’s my new photography student from the national tourism office, standing in for Alcina – while she does her fingernails:).

Shooting Tip: When it’s overcast or raining, waterfalls are always the first place I head to on a tourism shoot because, as you can see, the light’s even and – as long as you’ve lugged a tripod in with you – you can do long exposures of the water to get that “cotton- wool ” look. Ideally, no wind, no sun (but shoot when the sun’s high) and a polarising filter with neutral density filters if you have them. This one was shot on the large format camera at iso 200.F32 @ 3 secs.

Ps. I’m holding back on posting a pic of the top waterfall until the gods decide whether they plan to unleash a deluge or deprive me of the shots we have lined up if the weather improves….(I’m begging ya guys, just two days of sunlight and I promise I’ll go to church when I get back).

« QUICK PIC FROM VANUATU
REEF AND RAINFOREST – EFATE AT ITS BEST »