FIREWORKS ON EFATE – A SERIOUS TECHNICAL CHALLENGE TO PHOTOGRAPH 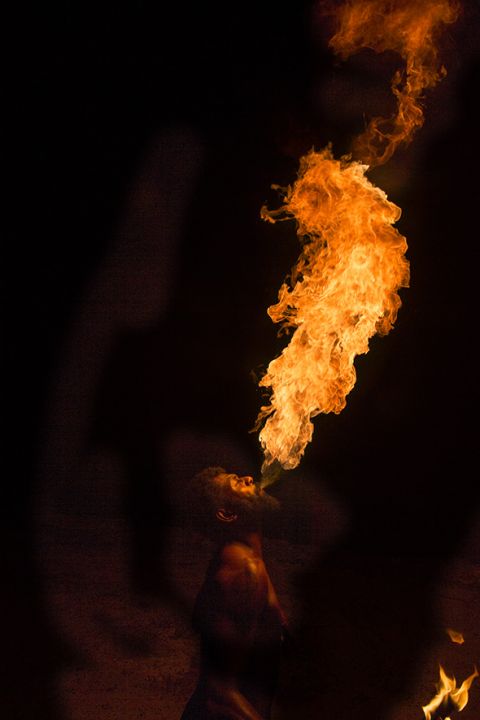 I’d have to say, capturing a sudden burst of bright light exploding from the darkness and the mouth of a fire dance performer is not the easiest thing in the world to photograph well.

Of a folder containing about a 100 shots, only a couple of pictures (above) survived the cull.

Stefan (pictured) is the lead performer in Vanua Fire, a Ni-Vanuatu dance troupe that bursts into flame nightly at resorts around Efate. Their performance is contemporary, rather than the fire dancing you’d expect to see in, say, the Polynesia countries. Seven men and women dance a choreographed performance to taped music with a dazzling array of swirling, jumping and dancing techniques. It’s well worth watching… and fun to photograph if you’re looking for a challenge.

After watching Stefan’s troupe to work out the most dramatic part of their performance (and there were several options), I waited until the end of his show and asked him for 10 extra minutes of his time, explaining I was working for the tourism authority and that I’d be happy to share the photo with him. I knew I needed a longer exposure to capture the extending flame but I was mindful the massive explosion of light would blow my settings out. So, I chose to keep my shutter open longer by shooting at F10 and I resisted the temptation to shoot in a much higher iso (iso 200) and I focused on the highlights of his face leaving the speed to work itself out (which turned out to be 1/640th of a second). Then I adjusted my exposure to what I captured in the two practice runs. In Lightroom, I fiddled with the exposures of the same photograph to produce two versions – one with Stefan’s face correctly exposed, the other pulling in the exposure of the flame to capture more of its detail, before marrying both images together in Photoshop and doing a bit of tweaking.

…..And that, dear reader, is about as technical as I am ever likely to get! Good luck.