WHAT ARE THE MOST POPULAR TYPES OF PHOTOGRAPHS BEING USED TO PROMOTE A HOLIDAY DESTINATION? 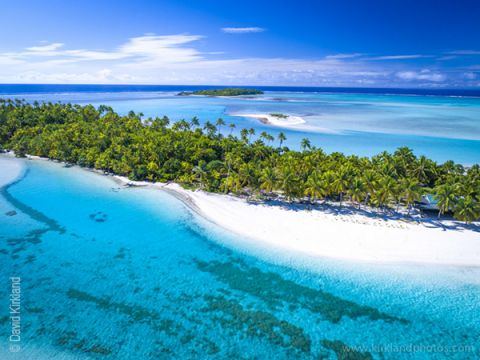 A drone shot of One Foot Island. One of the most popular photographs being downloaded to promote the Cook Islands.

The latest feature we’ve added to the photo libraries we build for tourism authorities is the ability to determine, at a glance, which are the most popular photographs being downloaded by media and travel agents to promote their holiday destination.

And the results couldn’t be more striking. Drone photographs (though I should qualify that quickly to say good drone photographs) are easily proving to be the most popular images being used. In one of our libraries, which identifies the top 10 images downloaded over the past six months, all but two photographs have been captured by a drone.

It’s likely there are four main reasons for this: Read On…….

Seeing familiar attractions from a different perspective: Personal drones are a fairly recent phenomenon which have only risen in public popularity over the last five years (now, every man and his dog appears to have one). With no great skill and a couple of thousand dollars, anyone can now fly a drone and capture stunning aerial footage.  As a result, there has been a proliferation of aerial imagery made available in media and over the internet from which we are seeing familiar sights captured from previously unseen perspectives – and it’s impressive. Of course, we’ve long had planes and helicopters to show us our world from a bird’s-eye view, but they aren’t able to go to where drones can go so inexpensively and so immediately. Within a few minutes – literally – a drone can be up in the air capturing a special light or shooting a well-known landmark. Additionally, photographers can now afford to stay in the air longer and fly around to better explore the options. So, suddenly, we are seeing our world – or the destination we plan to visit – from a completely different, and often dramatic, perspective.

Improvement in the quality of drone photography: Added to being able to see something from an interesting aerial perspective, has been the improvement in the quality of the imagery drones are now producing – particularly in video footage. With the 4k quality offered even in some of the smaller drones, all you really have to do is fly it around a site to get a stunning few seconds of footage. That said, it was only last year the drone market leader, DJI, released a drone that was able to capture high quality still photographs as well – the DJI Phantom 4 Pro.  It’s more expensive than those before it so there is less of them about but it is able to capture stunning, 20 mgb, high resolution aerial photographs large enough for a double page magazine spread.

Greater demand for aerial photographs: Like travel and tourism photographers who are having to add drone photography to their repertoire to stay competitive, tourism authorities have recognised the appeal of aeriel photographs in terms of promoting their destinations. You’d expect to find few promotional photo libraries now that don’t include drone photography. As the popularity of downloading drone images from our libraries indicates, creative directors are keen to have the option, editors recognise the potential of them to sell more books, magazines or newspapers, tourism operators see the way they can be used to promote their businesses, and travel agents are finding out – first-hand – how a good aerial photograph can persuade a client to go to the destination they are promoting.

In summary, demand for appealing drone photography has never been higher (… and, with all this competition about, the challenge for professional photographers has never been greater, he says, as he updates his drone software for the next assignment). 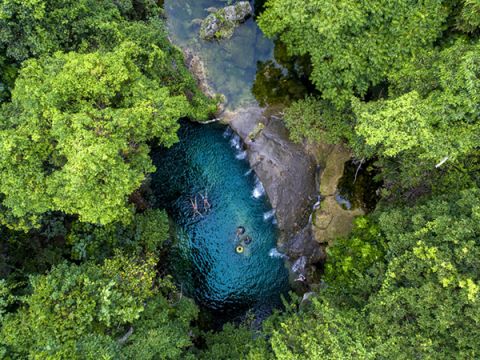 A popular drone shot of a swimming hole on Efate Island, Vanuatu.

« A DAY AT THE TOOGOOLAWAH RODEO
HANDSOME “PROP” FOR SOMERSET SHOOT »