“MODERN PNG” (WITHOUT THE FEATHERS AND FACE PAINT)

It’s become common in the developing countries I’ve photographed throughout the South Pacific, Asia, the Middle East and the African continent over recent years to want to project a “modern, sophisticated destination” – one that offers a broad range of services and attractions for visitors.

“No David,” they say to my enthusiastic inquiry about wanting to photograph traditional culture which tends to start something like: “You’re an amazing destination with one of the richest and most fascinating traditional cultures on the planet. Let’s aim for a Hero Shot of a group of your tribesman or bedoins that will really see your destination stand out from its competition, maybe an ancient ritual practiced over thousands of years, or some traditional foods or medicines…….”

Before they politely interject:

“David, we don’t want photographs of traditional culture this time. We want you to shoot to promote a modern destination – one that offers a range of world-class amenities – including a variety of restaurants, fine hospitality, good food, tourist activities, cafes and nightlife.”

Now, I’d have to admit, this has required a bit of adjustment on the part of this photographer who’d stick a bone through his own nose to  photograph tribal culture but, that said, PNG’s appeal – like any destination – is obviously more than just its culture: it’s the sum of all of its attractions which, of course, also  includes its contemporary culture, its scenery, its activities, its accommodation, its food, its services and facilities, and, of course, its people.

In this regard, it was a pleasure to see how much Port Moresby has changed as a city. No longer filthy and sprayed with betelbut, it’s capital, Port Moresby, has been transformed over the past decade with the development of a new, glimmering, waterfront precinct, several new multi-story hotels (including the Hilton which is about to open), a world-class museum and art gallery, several convention centres and numerous restaurants and cafes that offer visitors a modern capital to explore. It’s become a great stepping-stone to venture further afield and  experience one of the most amazing – certainly one of the most visually exciting – cultures on earth.

Of course, the appeal of a destination is the sum of it attractions – less it’s detractions –  so I could hardly write about Port Moresby without mentioning the country’s reputation for crime which tends to sit high in the consciousness of people looking to come to PNG. Well, I think that’s changed too. To start, let me say that in 20 years of  traveling the length and breadth of the country, I’ve never had a problem or felt any serious threat to my personal safety. And that, during this visit, I wandered the new foreshore on several occasions enjoying sunset and early evening with hundreds of locals swimming, playing basketball and just hanging out.  It could well have been Southbank on a Sunday.

I’m not discounting the reports in the Australian media (despite their tendency towards sensational headlines) or the security presence that obviously still exists for a reason; but I am saying that with the same common sense you’d apply to any city (ie don’t wander around at night, be conscious of your environment etc, etc), you’re likely to be fine. And that, outside of the city, country people are country people no matter where you are. In PNG, my experience is that they couldn’t be friendlier.

So, this assignment – and, hopefully, the photos I captured for the tourism authority – are a reflection of all of that – a modern, generally welcoming city that, in my opinion, has come of age. At very least, it’s definitely worth the stopover on your way to experiencing the rest of the country and, if you’re lucky, one of the greatest cultural shows on earth.

Here’s a small sample of some of the photographs captured: 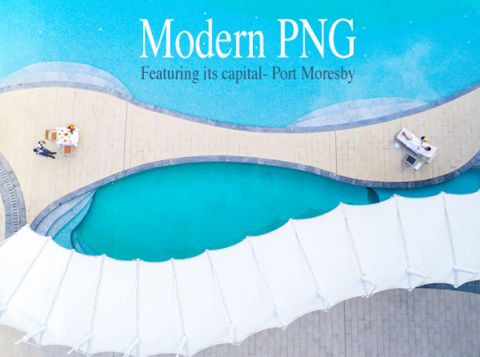 Ps. I couldn’t help myself, blending the last photograph with a pic I captured of the new APEC Haus and one I captured of a Hiri Moale performer in traditional costume. The venue has been designed in the shape of a giant Lagatoi vessel which is synonomous with the Motuan culure that celebrates Hiri Moale.

For those wanting to see some more “feathers and painted faces”, you’ll see plenty in the PNG gallery of our photo library at www.davidkirklandphotography.com